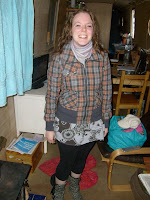 I haven't blogged for ages due to the dreadful signal and life was just too short to bother. We've already moved to Braunston but I've already written this so you have got to imagine that I'm still at Crick until I write the next one in a couple of hours (it's ok. I'm confused as well). We've got the outlaws free loading for Sunday lunch next weekend and we're not entirely sure where we'll be. Maybe we just won't tell 'em. Terri visited last weekend to pay the obligatory 24 hour visit to her old folks and Lisa never got out of her pj's all day.

I climbed to the top of Crack Hill (the local high point around these parts) and got a very good view of the local area. It's amazing how the canal meanders (see I told you I'd use it) around the countryside as it does. It's not surprising getting anywhere takes an age. 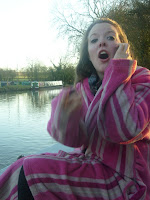 Since we have got hold of our Belfast sink I have come across several other free ones. Most are used as planters so I can't have them but there is one that I discovered semi-submerged in a stream not too far from here. They go for £100.00 on ebay so even if I don't use it it may be worth retrieving.

Lisa lost her mobile the other evening and the first thing we knew about it was when there was a knocking on the front of the boat. I went out to see who it was and a lady said that she had found a mobile on the tow path. She'd had a strange conversation with a person called Bob (seemingly for more info on the possible owner of the phone) and had concluded, with the available evidence, that we on Pickles were the owners of the phone. 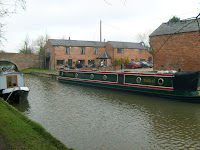 Well that was a keen bit of detective work as the only Bob on Lisa's phone wouldn't have known it was Lisa's phone and there is no name on our boat. It just goes to prove that there are honest people around although we would've done the same.

Derwent 6 at the water point at Crick (fellow bloggers).