We're still here at Newbold and last night we went for fish and chips at the Barley Mow. I would say that the peas were like the ball bearings from a Russian T72 tank but at £3.50 you can't really complain (although the Russian tank commander might). It would have cost £5.00 at the local chippy and they don't serve beer.

The paintwork has settled down nicely and looks better than when it was just finished. I've been asked if I will place an up to date picture on the header of the boat which I think is a good idea. I'll do that when I can get a side on view. The rest of the week has been taken up with Lisa working and me making bows. 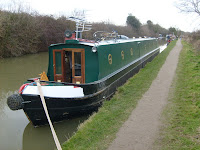 Other bloggers have been and gone and we'll catch up with them soon I expect. I've also realized that the less I eat, the less I have to empty the toilet cassette. Funny that.

Woooo she looks fabulous. I must remember to look out for you on a green boat now. Goosh I am going to get confused. Honestly Pete she looks great well done. Hope to see you at some point. Jo