We have been at Hillmorton this week. The top lock was a little muddy so we moved down to the bottom on Tuesday. The signal is not good but hopefully it will be better at Newbold when we move tomorrow. The journey from Braunston was completed with both of us at the tiller (although only one of us was in total control of the boat) as Lisa had the week off.

My little van is now moving again. We got a letter from Charnwood County Council asking if our car had been abandoned in Barrow upon Soar (where we abandoned it) so we rang and said that we hadn't. He told us that it was all legally parked and documented but that a local resident had complained about it being where it was and he was just wondering if it had been abandoned. It 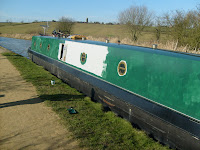 had in fact broken down at the end of November and we had parked it up returning occasionally to try it. The man from the AA came out and sorted it so hopefully I'll get a second hand fusebox, fit it and fix the leak that frizzled it in the first place. It can't be that hard to replace a fusebox on a van as there's only half a million wires going into it. I'm willing to have a go as I've done all my electrics on this boat you know. 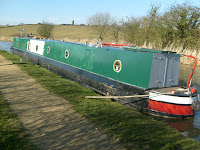 We have now painted one side of Pickles no 2 (well what else would you do with the first good weekend of the year). It's a little dodgy (but better then this photo implys) but it looks a lot better than it did this morning. It will need another coat to finish it off but that will have to wait until the better weather.

I'll try to improve my blogging intervals this week.

Hi Pete
Read about the paint job and within 30mins you cruise by.
Did notice ALL green on one side as against blog pic.