Well you'd have known we were at Braunston if you'd read the last blog (that was actually written at Crick but published at Braunston. Oh, don't get all confused again. It's pretty simple really). 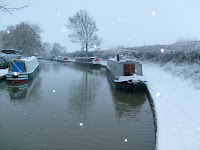 How come every time we decide to move, the weather is appalling (rhetorical question; no question mark). Today it started freezing and ended up snowing. I put it down to inflexibility on my part as, when I decide to move, there is little that will stop me including inclement weather, natural disasters, acts of God (what exactly is an 'act of God'?) or canal based terrorist activity. With the snow coverage, the lock sides were lethal (well, I am prone to journalistic exaggeration. Possibly a little slippery) and I did fall over, but only the once. I took it easy and did the Watford flight in an hour and a quarter. I only saw two other boats and some contractors vessels on the move. Most people are much more sensible than me.

Is Braunston Tunnel the blackest tunnel on the system? It ate the illumination from my tunnel light unlike any other tunnel I have been through. Well that's my excuse for zigzagging around in the darkness, bouncing off the walls. 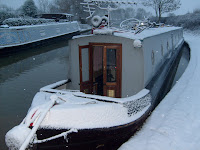 Swindlers and under the main road. The place is packed (I exaggerate again. It could be described as packed during the Historic boat thingy in the summer but not at the beginning of February). But we were warned that there were a few here when I read another blog which said so but I can't remember which blog I'd read it on. Lisa rang earlier in the day to say that school had been closed and she was looking for her home. I told her she would have to wait for another two hours for it to materialize as I still had Braunston Tunnel to zigzag and the lethal sided locks to complete. Lisa is very much hoping that the school will be open tomorrow so she can get on with all that marking. At least I think that's what she said.

Well done Lisa for getting a 'snow day'! So far, I haven't managed - my jolly staff are just too dedicated!!
Andy on Khayamanzi

Lisa says that she's got more work done today than she would have had at school. All her marking is now up to date!!! Those pesky kids.