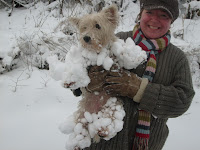 Sam with snow boots
Another day off for Lisa. These teachers don't do any work do they? On a news report the other day, someone from Coventry Chamber of Commerce was saying that schools should remain open no matter what and that teachers should get their walking boots on and walk to school then read stories to the kids that made it in. What a brilliant idea. It just shows how much the business community knows about education although they love to denigrate teachers and criticise the education system for the standard taught in schools (and so do many of you). Fourteen year olds would respond wonderfully to this kind of 'education'. 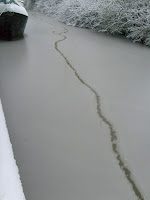 Duck trails
I have been asked to report on the state of play with the Old Plough and can state categorically that absolutely nothing has changed and this can mean nothing but good. We had a boozy afternoon in there, a meal to boot and a more pleasing experience it would be difficult to have. It's the advantage of Lisa having caught up with all her work on the previous snow day. 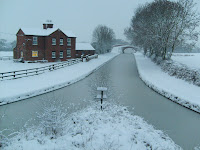 Braunston turn
Well I may as well join the throng and post some photos a snowy canal boat scenes. Here's some photos of our early morning walk around Braunston. One is of the traffic chaos on the bridge above where we are. If only to justify why Lisa (teacher) did not go into work. I would say that the people who were in the traffic chaos were a little idiotic to even leave home but they would probably say that they were the ones that were conscientious and not work shy, unlike teachers. 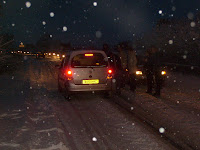 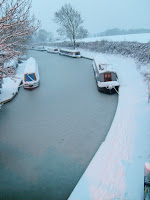 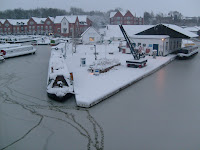 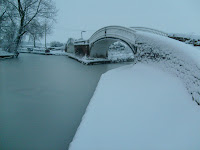 Braunston turn in the snow

Just a thought aren't you another 5 days over the 30 days?

plus the 365 days we aren't mentioning?

At this rate I will be finished before you!