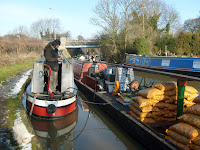 Gosty Hill passed today and I took advantage by buying my diesel for the month and a couple more bags of coal (just to support canal businesses as I didn't really need it). Obviously I'll only been using all the fuel for heating purposes as this is the only way that that Iain & Alison sell it.

Lisa was on a course today but she told me that on Monday this week, when the snow was lying on the ground, that someone at her school had written on the snow in large letters the word 'NOBED'. With a full classroom Lisa was repeating the word, "no bed, no bed why would someone write no bed in the snow." One of her pupils kindly pointed out what it really said, 'knob head'. After all those years of teaching they can still catch her out.

After having been on the Grand Union (Leicester Line) for several months it's a bit like Picaadilly Circus round here with a constant amount of canal traffic. It was unusual to see any traffic at all for days round that way but round here its very different.

I note that the pub, Admiral Nelson, by lock three on the Braunston flight, has closed it's doors to customers siting lack of bums on seats. I have never been in this establishment and have no idea whether it was a good pub or a bad one (and now I am never going to know). It's always a shame when historic pubs close and with the changes in drinking habits, increased taxes and the current economic climate this kind of thing is increasingly prevalent. Use 'em or lose 'em.