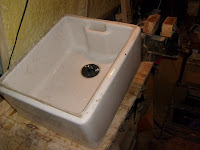 We've now got hold of a Belfast sink, sometimes called a Butler sink. It's the full sized version and it's to be the centre piece of the kitchen (at least until we get the solid fuel Rayburn). I can't say where it came from as it's all top secret at present. Needless to say that it hadn't been used as a planter although it's purpose was possibly worse than this. We're not thinking about that right now. I just have to make the cabinet that it should fit on and then build the rest of the kitchen around it. How hard can it be to build a kitchen!!!

I walked up to the Co-Op in Crick this evening for wine and pizza. When I left the shop I turned right and marched with authority up the road (as if I lived there) about three hundred yards before realizing that I had gone the wrong way and didn't know where I was. There being some dog walkers around and not wishing to appear stupid nor having to ask directions (huge ego), I marched on with renewed vigour getting more and more lost until I had to admit defeat and retrace my steps, head hanging low. Stereotypical man.

hiya, I was wondering if you could email me the address for your longbow website? would love to look at it :D

my email addy is:
greenmyst2003@yahoo.co.uk

Not typical to admit it though! I did laugh (I've done exactly the same sort of thing myself...)

I don't know where you've been hiding ;-) I've only just found you - and not a minute too late - a great blog!
I note you've still got our old blog on your list - we've moved to nbepiphany.co.uk

Hahahahaha. Sorry I should not laugh, but I could not help it. I am so glad that I am not the only person, who goes in the wrong direction. You do realise it is the sign of old age LOL.
Are you enjoying the snow at Crick???

BigJohn - I've been here all the time. Well here or hereabouts. All sorted now. The new blog details are updated. It only took me six months.

You can laugh all you want Jo. Lisa already does. Usually several times a day.