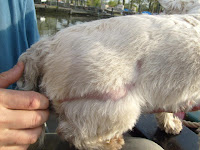 Sam (dog) got a close shave yesterday when she fell into the engine backwards and got shaved by the alternator belt. It actually shaved a small banana shaped and sized area from her rear end. It could have been a lot worst than it was. I must get the engine more closed up than it is as this has the possibility of happening again if we're not careful.

Several grams of cute versus 20 tons of steel. Cute always wins. We were crossing over Edestone Aquetuct when half 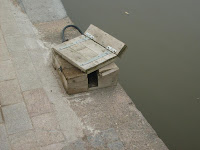 way across we came across a couple of mallards with their newly hatched brood. In fact they were barely several hours old by the look of them. Well they couldn't get out of the way as the aqueduct was as wide as the boat and they can't fly, if they jumped over the edge they would fall and they couldn't move any faster than they were. What's a boat to do. They were going slower than tick over so I could only stop and let them get on with it. Five minutes later they reached the other side and we could move on again.

The journey here was in lovely weather and the last 17 (16) locks were completed without mishap except that one half of the locking crew didn't leave the boat and opted to watch telly all day. Well it's her holiday after all. 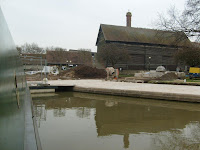 We visited a town centre bar last night and one would have thought that at £1.75 a pint, I would have been singing its praises but this would not be the case. Weasel Wee would be the only way to describe the beer. Pubs shouldn't be allowed to sell beer for this cheap a price anyway as it doesn't keep them open and is a short term measure at getting punters through the door. They were actually trying every trick in the book, cheap beer, live acts (soul and Reggie???) and cheap food (well the former was off and the signs around the place declaring that, 'At present we are unable to supply food. We apolo 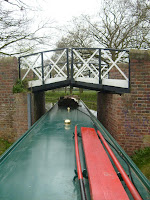 gise for any inconvenience.' Have the H&S people been involved here? Looking at it now, probably).

If narrowboating was cool (and we all know it's not) then my entrance into the basin was mega cool beyond belief. With the world and their dog watching, we entered the basin and Lisa stepped off the front, tied up and I pivoted the boat and lined up for a reversing maneuver to back into the berth. It worked absolutely perfectly and we were moored in no time. But the slightest breeze would have changed everything. The only spider in the ointment was that when I pulled in to let Lisa off, I accidentally hit and broke a wooden electrical junction box on the side of the basin. Ooops! I hope it wasn't a historical Shakespearian one. Silly place to build one anyway.

The basin is quite spectacular in the middle of the town in front of the main Royal Shakespeare Company, beside the River Avon and in amongst the throngs of visitors. The works on the side are a distraction from the rest. I cannot imagine why it is taking so long as they only seem to be landscaping the gardens. 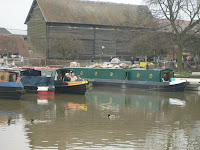 We came to Stratford for a bit of culture but the theaters are closed due to it being Easter. The exploitation of this geezer called Shakespeare is appalling but the tourists seem to lap it up. Queues to visit his birth place, death place, eating place, drinking place, father's place, dog's place, friend's place, and many other places. Dreadful. I'm not buying any more of his books in protest.

Can you get a photo of the RSC building? I knoow you're on holiday and all that, but it'll save me going there to see it...

I'm afraid that it's all hoarding at present. They seem to be doing extensive repairs to it and I don't thin k it's going to be finished for a while. But it does look like it will be amazing when finished.

I vaguely remember that someone wanted to knock the place down and start again but the powers weren't having any of it so they seem to be extending around the existing building. I'll post a photo tomorrow.

if carl wants a picture check out my stratford site shakespeare wuz ere at http://www.shakespearewuzere.com
hope you dont mind pete.

Don't mind at all.