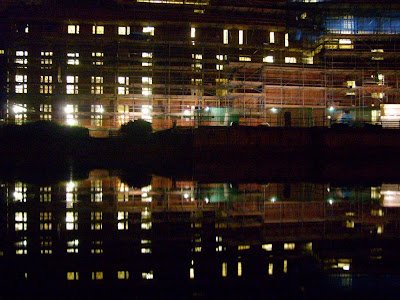 Thanks. It's a big building, isn't it? Many a happy time had inside...

Oh, audience. Don't let the next question be 'what did you see?' because I really can't remember (typical male), but it was something by Shakespeare and may have had Patrick Stewart in - although that may have been somewhere else and it may have been Star Trek...

But it was fun!

I remember one time my wife and I stayed in a slightly run-down B&B (being students we were used to that) in Stratford and were kept up most of the night by a Swedish couple doing what Swedes do. We were going to 'show them how it was done' but that good old British stiff upper lip overrode any other desires.

If you get the chance to eat out, may I recommend Lambs on the main street just across from you. Great food and my wife's favourite place to eat whenever we end up in Stratford.

the new theater looks just as unimaginative as the one it replaced known i believe as the jam factory.

I'm no architect as (I'll leave that to my brother, who is) and I wouldn't know a pig's ear from a stunner. It's just going to be different, that's as much as I can tell.

No more eating in Stratford for us until next time but I'll bare it in mind. And I thought Swedes just sang dodgy pop songs.