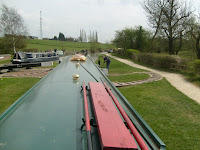 Several bloggers were spotted en route. Nb Rock n Roll seen near Brinklow on Sunday, nb Piston Broke seen at Rugby on Monday and I spoke to Del and Al on nb Derwent 6 when we arrived at Braunston. 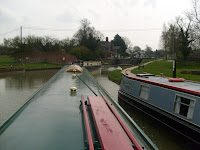 ribed as a nautical cap. He obviously thinks he's Captain Canal. Well I've got news for you Paul, I'm Captain Canal and there will be no imposters.

Just what we like to see. A boat leaving just as we arrive.

As I have already said, we are at Branston after a night at Newbold. I seem to have been proved wrong about the water point at Newbold so far(I predicted that it would be kicked over and that the area would be saturated with wat er as there is no drain) but I'll be keeping an eye on it with a future hope of being able to say, 'I told you so'. We are waiting for Terri to arrive so as to start our trip in the morning. I hear that Bancroft Basin in Stratford is a building site at present but that there is winding available in the basin. Tomorrow morning we have to do the car shuffle as Terri will be leaving us when we get 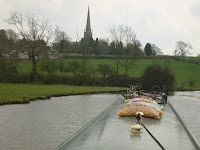 I think I've been a little ambitious with the layout on this blog. It's all a little prescriptive with Blogger.

If Bancroft Basin is still a building site (and I hear it is), then this must go down as one of the worst managed building projects in history. We were there in September last year, when the basin was surrounded in wire fencing and access to the river was difficult, and completion was already several months overdue. It was meant to have been finished before the summer season last year, although all the signs had been updated to say the work would be finished in August. I'll be interested to hear what it's like now, and what the next target date is.

Oh, and have you told your crew that this route is 81 locks in each direction?

81 locks! Lisa's going to have muscles like Popeye once this trip is done...

As captain, you deserve a rest.

For Gods sake people, don't mention the locks. I've told her there's only a several of them later in the trip. A couple of big mouth snitches.

I think that I read your report then Adam and thought it would be all ok now. Apparently not.

Anyway according to Nick's Canal Planner http://www2.mihalis.net/canal/cgi-bin/canal.cgi
there's only 78 locks, so there.

I was including the 3 locks you've already done.