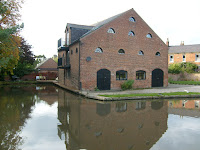 It was Wednesday so it must have been Shardlow. Now this is more like it. We got away from Alrewas at lunchtime and after an overnight stop at Willington we have arrived here for a couple of days while the Trent goes back down to normal levels. No one here is over amiable with no, “Hello”s being offered but it is very canal friendly, indeed canal centred. The village is split into two distinct parts, one based around the canal the other around the road. 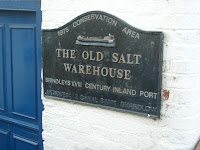 Guess which one's more interesting. There's a good canal based industrial heritage and whilst the main road goes through both parts of the village, the canal wanderers through the smaller part at right

angles to the main road. 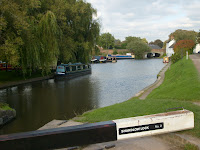 The warehouses look great whether converted or not. There are also several wharfs and associated side arms, four pubs, a boatyard, good chandlery, two marinas, two basins, boat hire operation, loads of on-line mooring all in a village of less than a hundred homes.

It's also closer to work for Lisa which is good for my health and well being as well as Lisa's. She 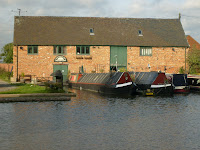 had a bit of a wobble earlier in the week and was complaining (rather vocally I thought) about the length of time it took her to get to work but that was then and this isn't. I've let her back on-board again.

The floods have subsided and it's time to move on to Trent Lock today. I've been here for sixty four hours now instead of forty eight and will probably be ticked off for being a constant moorer by the 'rules is rules' brigade before long.