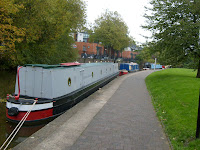 Nottingham at last. We left Trent Lock after a car shuffle and made our way down the Trent through Beeston Lock and are now on the moorings where Homebase used to be. I say used to be as we have not been here for ten years and they have built flats where the DIY shop used to be. They didn't even have the decency to ask our permission. 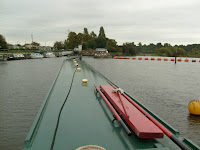 We are making our way up to Nottingham Castle and the Beer Festival in half an hour so don't expect a running commentary for the next twelve hours or so. In fact don't expect any verbal communication after about nine o'clock. 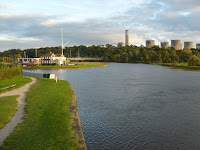 Oh by the way. I had a bit of a mishap yesterday when going through Derwent Mouth Lock. I was
coming in to land before the lock and jumped off realizing that I may be going a little fast, wrapped the centre line around the bollard but instead of wrapping it once around the bollard I did it twice. The inevitable happened and the rope snagged on itself and the boat came to a sudden halt but the momentum canted the thing over to what seemed like thirty degrees. One of our kitchen units fell over and we lost all our glasses and several other instantly replaceable items. It is a surprise what a mess it all made but it looked worst than it actually was, Fortunately I had it all cleaned up before Lisa came home from work and I could make up my own version of events.

You don't think Lisa might just happen to read your blog version of events then? Have fun at the beerfest.

Doh!! Never thought of that.