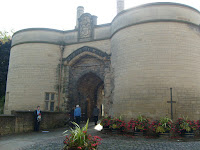 The Nottingham Beer Festival was quite good but there were some problems along the way. The organisers had vastly underestimated the amount of people who would turn up at the new festival site. It's quite obvious to me that when you change a venue from Victoria Swimming Baths to Nottingham Castle it's more likely that more people will hear about it and therefore, turn up. It's also likely that the tourists who are at the castle anyway will pop over to the vast white beer tent and sample a few.

It would've been nice to have some live music in the main beer tent rather than in a separate tent although I think that it encouraged a load of students who would not have otherwise attended the event. We did say that we would mention two people that we met at the music tent so hello James and friend It was lovely talking to you. They'd been there since eleven that morning and had been there for eight hours by the time we met them and had every intention of staying till the end. They give no sign, as we left them, that this would not be the case. More staying power than us.

By the time that we turned up at about five on Saturday, the souvenir beer mugs had run out as had the programs that you rely on to make your choices. We managed to find a mud spattered one to find our way but that's not really the point. 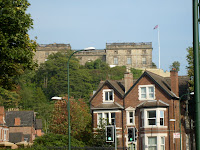 beer tent at the end of the night looking down on Nottingham. It is a constant source of bewilderment to me, and a source of annoyance to the many tourists that turn up, that Nottingham Castle is not actually a castle at all and merely a large house on a cliff top. The gate house is authentic but the rest is nonsense. Although as a Nottingham born and bred person, Lisa refutes this

When we left we wanted some chips as we were expecting faggots and mushy peas at the festival but this has now been contracted to outside caterers. We were not paying their prices nor did they have faggots and peas on their menu's (but there was a small container of olives for five pounds. When did olives and real ale ever go together?). Another tradition sadly lost to modern business practices. We were also on the 'wrong' side of Nottingham for chippys. Our one saving grace was McDonalds (God we must have been sozzelled). “I'm sorry Madam but we can't serve you since you don't have a car”. Don't ask.

Lesson learned. Friday is the time to attend. Even CAMRA members who had come from other areas were not at all happy with the organisation. These are serious people with the serious task of drinking as many types and as much beer as is responsibly possible within their lifetime and bad organisation detracts from that task. 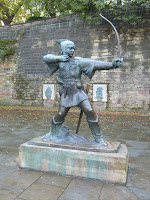 Robin's looking quite down at heel these days. The bottom limb is missing from his bow. If it was present the bow would not be long enough to be a longbow of this era. It's also the wrong type of bow and bends mostly mid limb and does not 'come round compass', although it may be slightly recurved which again is not correct for English bowmen of the period. It will break at this point sooner rather than later on any all wood bow.

Also I'm not sure what the purpose of the binding towards the end of the limb tip is, Possibly there may have been damage at this point or a lift on the backing he's attempting to temporarily repair. It's not a good idea as it adds weight to the tip and slows cast and therefore range. The handle binding is also not normal in medieval bows.

The fletchs on the arrows are modern parabolic. The point is not of a recognisable type by the British Museum criteria. The arrow spine is too low for the poundage of the bow. The draw is also wrong and the anchor point is too low.

God I am a boring bugger. I hope to be starting to make longbows again in November. I'm obviously missing it.

I truly enjoy your blog, but living in the US, I find your "true English" makes the reading even more interesting. Over here, "we were expecting faggots and mushy peas" suggests you were looking for homosexual men and overcooked peas. It forced me to investigate further, enriching my knowledge of the British culture. I had the please of visiting your country in 2004 and hope to do it again. This time a narrowboat adventure will definately be included. Thanks for a wonderfull blog.

Hi Bill
Nice to know someone reads this rubbish. We certainly are a couple of nations divided by a common language. Spicy meatballs and, as you surmised, soaked, overcooked, boiled, peas.

You can keep reading the blog if you like but I can't promise it's going to get any better.
See ya.