Last night's pub was a big disappointment. OK, my Nicholson is the 1995 version and I refuse to buy another until this one falls apart but the Castle and Rose ended up being one of those pubs that has now concentrated on the food rather than the beer and congenial atmosphere. It had become a restaurant in all but name. All very well but not conducive with a pleasant time. I am no lover of restaurants as I believe many serve overpriced, mediocre food in appalling surroundings with minimal atmosphere. Pub food may also be mediocre but it is usually cheap and, in many cases, an abundance of atmosphere. Take our meal today at the Barley Mow at Newbold-on-Avon, itself not a particularly atmospheric pub but the clientele were the personification of a traditional English pub. The food was cheap, hearty and unpretentious with a good pint to boot. Lisa and I rarely leave anything on our plates and it has be be particularly appalling for food to remain uneaten.

We met Les from nb Valerie on route and Andy from nb Khayamanzi in Newbold Tunnel. I say met but that is not really the case unless you include shouted hellos as this was all we could manage. We do not have the name on the side of the boat and I catch them unawares. 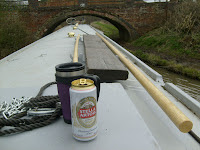 I also had a great catch from the cut today (there must be a name for useful stuff we find in the canal but I have no idea what it is). I noticed something attached to the bow and climbed over the roof to get rid of the offending article with the boat hook. I released the item and when it floated to the surface found it was a perfect piece of timber suitable for use as a gangplank. A lovely piece of oak 8 foot long, 12 inches wide and 2.5 inches thick. It will need a couple of weeks to dry but when it does I'll give it a pass or two through the thicknesser and it should come out looking brand new. I'll then give it a coat of varnish so it fits in with the boat pole and hook. Nothing like getting something for nothing.

Lisa seems to have found a place inside the rear hatch when we are on the move. I had always considered that this was my place and that she should be inside or in the cratch, I'll have to think of a method of dissuading this practise.

Tonight we are moored in the middle of nowhere somewhere north of Braunston. No need to turn the generator off at eight. Very pleasant.