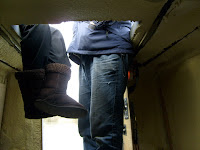 We have taken a trip out to Hawksbury Junction or Sutton Stop and the Greyhound pub. This is renowned as one of many people's favourite pubs on the system. Terri took a turn at steering, something her mother has valiantly avoided since we have moved aboard. In fact Terri did very well and was avoiding bridgeholes and the bank at bends like the best of them. On the other hand I had to throw it into reverse quickly at a particular bridge when I realized that I was approaching far too fast. Much to Terri's amusement I narrowly avoided the brickwork but ended up in the bushes. Terri shook her head in disgust and I had to relinquish control to her with my head hanging in shame.

We had a meal in the pub and very good it was too. But after several pints the fresh air had us back to the boat for another early night. Terri must think that we are boring as hell. And we are. It is the beauty of reaching middle age that we can relish in the fact that we are boring and like the comfort of boringness and repetition. I'm obviously speaking for us both and everyone else as well. It feels good to be a spokesperson for a generation.

We passed several other bloggers on our short trip. Stonehenge from nb Sploosh fresh from their 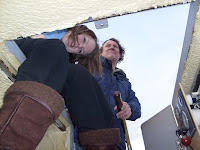 Warwickshire Ring and nb Matilda Rose on the way back to the Coventry Canal (I've just realised that Sploosh is missing from my links and that Matilda Rose is under the link Contented Souls) Obviously no one recognised our boat as it is just another grey primered hulk. Ours even looks looks worse in the fact that it more resembles a submarine than a narrowboat with its all porthole configuration.

Terri seemed to enjoy the day which started badly for her when the exhaust fell off her car and we had to get it to the garage for replacement. It's better that it happens here as opposed to her other home in London as she just has to ring me and I can get it all sorted in no time. In London she has to get her friends involved and find out what they should do next then try to work out how to do it. It's all happened to us before and we know what to do. It actually makes you feel useful in their world where it is all to often that we feel not much use at all.