It's been over a week since I last posted. The boat is finally on the Ashby. At last. There were adventures aplenty on the way back involving breakdowns, freezing nights, falling into the canal and twelve hour days at the tiller (I may have whet your appatite).

We picked up the boat on Saturday morning as we had planned to. Final checks complete we had to reverse the thing five hundred metres to the nearest winding point rather than driving an hour down the cut and an hour back. I know that all you experienced boaters will be thinking, so what. That's no big deal. This was the first time I had driven the thing. Never mind the first time in reverse. All sorted we set off. After a couple of miles at Stoke Works I noticed the oil pressure was getting a little low so pulled to the side. The engine bilge was full of oil and I 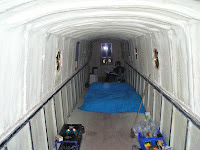 thought this is not good. Checked the dip and there was enough to see us to a boat yard on the map at Stoke Prior. On arrival I went to the local chandlery to buy some oil and to see if there was a mechanic around. Fortunately there was. A certain Ashleigh Pinder of JL Pinder & sons Boats. He was kind enough to come and have a look. The diagnosis was that the oil pressure sender unit had a cracked coupler between the unit and block and required a 1/4” BSP male/female coupler that was leaking oil (I thought all engines nowadays were metric. Apparently not). This was something that the New Boat Company was aware of before hand as their first handover was postponed due to a faulty unit. It obviously had not been replaced as I had been told.
We spent the night moored by Black Prince hire Boats and Ashleigh came back the next morning 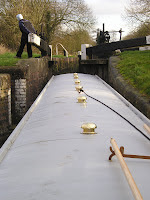 at eight thirty and blocked the relevant hole with a suitable plug. He said that he would sort it out with the N.B.Co. but we insisted that we pay him for his work as we did not want him to be out of pocket. I've got to say that Ashleigh is a top man and I would recommend his skills to anyone. Since I have heard nothing but good reports about the man and his boats. He charged one hours labour for the work and we were ecstatic to be able to get through the Tarrgebigge before the closures started again on Monday. This involved a certain amount of work, mostly on Lisa's behalf. She worked through the locks like a trooper, every one of which were against us. We started at nine o'clock. And finished at five o'clock opposite a hire base but I cannot remember which one or where it was (Alvechurch Boats at Alvechurch I think) as my 10 year old Nicholson is still on the boat as I write this. Check out the photos and see if you recognise the company. We went for a pint at the Weighbridge Inn and something to eat. Good home made fayre. We also came across some editions of Waterways World from 1993 in the bar which made for entertaining reading, especially the prices of boats. 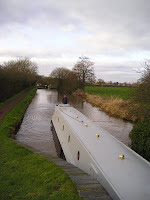 Next morning it was an early start as we wound our way to Birmingham. This was to be the shortest day of the trip and we were moored up by four o'clock after a fairly uneventful lock free journey. We did come across our only blogger boat in the form of Mr David at Gas Street.
Then on to farmers flight the next morning. This was quite interesting as much of it was subterranean under the buildings of Brum. Farmers was fine if slow but when we got to the Aston flight, the control unit fell apart in reverse just as we were leaving lock 4. I managed to arrest the backwards motion and tie up before killing the engine. Taking the thing apart I found the offending bolt and tightened it up ready for onward movement. We got to Fazely junction after a marathon journey that partly took place at night with Lisa madly waving a head torch from side to side whilst me driving in pitch black finishing at six o'clock where Lisa had a RV with a lift home as she had to be at work the next day.
This left me to complete the journey by myself from Fazely to the Lime Kilns on the Ashby and I decided to do it in a day. Silly me.
Up at seven, breakfasted, dog walked and ready to go at 7.45. This ended up being a twelve hour 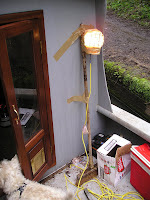 marathon at the tiller with a twenty minute break for bacon sarnies at eleven o'clock. I was freezing. The ice on top of the boat took an age to thaw. The two locks on the Coventry out of Fazely were the first I had done by myself but were not as difficult as I had though they would. They were against me but I worked out how to do it albeit the hard way. The Athestone flight were a different story. I was more eager to get through them as fast as possible and by then had worked out the fastest method of doing them.
Inching the boat into the lower gates I would nudge them with the bow to see if there was any water in the lock and if not with a bit of power they would open. Inch onto the top gates once contact made, into forward gear at minimum revs. Lift dog onto the roof, close lower gates and open top paddles. Boat lifts, one paddle down boat opens gate under own power assisted by me, I jump on the counter and once the stern of the boat passes the gate put boat into reverse and jump off to close the gates. Boat moves about 10 metres into pound then slowly reverses back to me, lift dog onto counter, jump on and into forward gear which besides thrusting the boat forwards also closes the top gate. Onto next one. 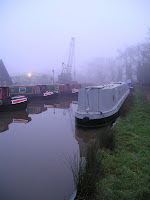 Gongoozelers were somewhat amazed by the fact that the boat was going forward into the pound with no-one aboard only to return thirty seconds later when I jumped aboard. It worked every time. But of course you've all done it before, got the tee-shirt, seen the video and a have in turn used it for dinner party conversations. But I haven't.

I have always considered Atherstone a complete dump, full of scronks but boaters always say it is an adorable oasis of calm and tranquillity. I now see why. From the canal it is. Not like Nuneaton. Atherstone shows its best side to the canal, Nuneaton shows its spotty, white, hairy ass to boaters. Not really a place to stop for a picnic. I at least wanted to get on to the Ashby before stopping and I ain't stopping here. Children hanging from bridges (no not from ropes, (more's the pity) from their fingertips) screaming "give us a lift mate". "Err, I'm not sure I'm going in your direction". "Haven't you considered that your parents may wonder where you are."
By the time I got to the Ashby it was almost dark but stupidly I was determined to finish what I had started and wanted to end up at the Lime Links pub near Hinckley. This was particularly stupid as I was driving at night without headlights/tunnel light. Time to rig it up. This completed I rang Lisa and said I would be there a within the hour. Light rigged I went onto auto pilot. I was frozen to the bone and stamping my feet on the counter merely told me my feet were actually where they should be and did nothing to warm up my frozen 6' 4” frame. The world is a different place in the dark and steering is a completely different experience. Foliage jumps out at you and the cut feels very narrow. Bridge 6,7,8,9 oh god will this ever end, 10,11, I can see the A5 road, 12,13, that's it I can almost smell the beer, 14 and here we are. I pull into the water point to see if there is room right outside the pub. There was. Untie, step forward to reach the centre line, splash. What was that!!!!! It's you you fool, you've walked into the canal up to your bloody waist. Shocked I climbed out but have the presence of mind to tie up the centre line. It must be something below zero. Checked to see if anybody else saw me (ego first). Releived, I climbed inside over the uncovered engine, rummaged in my bag in the pitch darkness and changed into dry clothes as fast as possible. Without a pause I threw the thing into gear and went through the tunnel to park right outside the pub where Lisa was waiting. “You may be wondering why I am wearing this slightly exotic collection of clothing and squelchy shoes, Well.....”
I squelched into the bar and ordered the inevitable pint. No-one seemed to notice who was 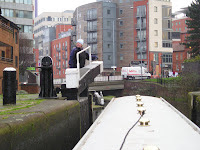 leaving that slightly damp canal like smell about the place. The tiredness really hit me. I had been on the tiller for exactly twelve hours, had only one bacon sandwich and one cup of tea all day and was frozen. I have a tendency to be a little obsessive and task orientated on occasions and it seems that this was one of those days. I slept reasonably well in my own bed that night. Lisa said I was an idiot. You always get the best support from the ones you love.

You may well be an idiot ;) but thank you for your adventures.

That's the easy bit done just the rest to go.