For whatever reason, I didn't write a blog last night. Yesterday before we set off, nb Hadar passed us by and I shouted the required hello and introduced the boat. Keith and Jo waved and passed by as they were in a rush somewhere. Very nice boat. We then made our way the the pie pub (Folly)at the bottom of Napton locks. We had a pint of Guinness each but didn't have the pie in the end as Lisa had made a particularly large breakfast. Apparently we missed Sue on nb No Problem by half an hour judging by her blog. Next time perhaps. 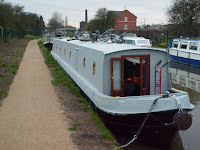 she had a hairdressing appointment on Saturday morning (cannot imagine why she didn't realise that before). On arrival at Hillmorton top lock we had to reverse into the mooring and the trolley that we keep on top got caught in the bushes and, you guessed it, it ended up in the canal. Do we ever learn anything. This morning Lisa recovered the trolley with the boat pole whilst I held the boat steady. 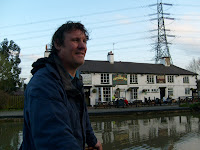 For lunch we ened up at the Barley Mow at Newbold again and this time we both had a massive mixed grill for less than six quid each. The new owners are really trying to make an impact and it is well worth a visit. Tonight we are at Hawksbury junction after being followed for some of the way by two boats containing the competitive middle class families from hell. Lisa actually steered the boat for several miles, around bends and passed both moored and passing boats. Very brave. She'll be winding outside the Greyhound at Hawksbury in one go before long. Then again pigs might be queing up at security in Heathrow.

We ate at The Barley Mow last week on our way back to Napton and were very pleased with the food as well.
Brian and Diana on Harnser