What is it with some men driving boats (I am currently refusing to use nautical terminology). There seems to be a perfusion of men wearing brimmed hats whilst steering. Are they pretending to be Indiana Jones or some such hero? When did this fashion emerge and why did I miss it? I must confess that I too have a brimmed hat that was stolen from a house that I used to live in Norway. It has never been worn and probably never will be unless of course I wish to resemble our friend Indiana.

The lower classes also seem to have a penchant for wearing luminous jacket, probably stolen from construction or gas companies. These can vary in colour from bright yellow to orange. Is this the only jacket they own or do they think they will be easier to spot if they fall in? The men who wear the hats look like they would never be seen dead wearing the jackets and the men in the jackets would think the hats were too Poncey. Nobody ever seems to wear both together.

I took a trip to Midland swindlers on Friday and bought the battery charger, inverter and other overpriced bits ‘n bobs. We got a Sterling alternator to battery charger and a Sterling quasi sine wave inverter. The washing machine is the only thing that may (or may not) need the sine wave and we can run that during day with the generator. I also picked up the lights as they were on offer for £1.60 so bought thirty of them. These included two over bed reading lights although their fitting looks quite a way in the future. I’ll try to have these fitted this week as the one hour forty five minutes of battery power on the computer is quite limiting and if we watch ‘The Apprentice’ and the other one, ‘The Apprentice You’re Fired’, there is no time to write the blog. That will hopefully be resolved this week. 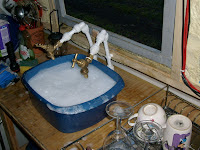 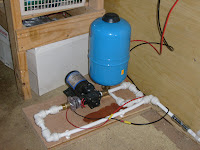 Eddie Boatstove (I don't think it's his real name either) from Northern Fabrications arrived on Tuesday evening with our new Boatman stove and all the assorted bits and pieces. I had called him over the weekend and he had said that he was thinking of doing the deliveries on Tuesday. By Tuesday late afternoon we had assumed he was not coming but another call revealed that he would be with us later that evening and at eight he turned up. The stove is now screwed to the plinth and is roaring away. We are highly impressed and with it and with the new Ecofan we are blowing hot air around the boat. Makes a change from Lisa blowing hot air around the boat. A very reasonable £400 with delivery included and all the bits a pieces for fitting. He didn't cut the hole in the roof though.

A liner for the chimney was also acquired as tar was running onto the roof and down the sides. I’m thinking of gathering it up and selling it to Tarmac as there’s so much of it. This makes the chimney a double skinned jobby and should cure the problem. I’ll have to dig out the pop riveter to fit it but it shouldn’t be too difficult. 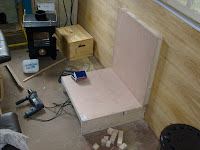 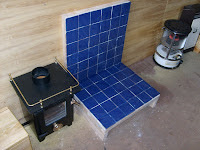 fitted the stove. It is slightly over engineered as I wasn’t sure of the weight. In fact you could get a herd of smallish disco dancing elephants doing their stuff on it assuming you could find said elephants with a penchant for Gloria Gaynor. 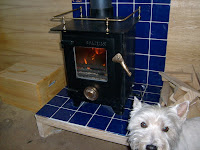 We have also bought a proper mattress instead of another blow-up bed. We kept buying them and Sam kept puncturing them. This one might last a little longer. Getting it back from the shop was fun as we only have the Ford ka on the road at the minute and it was a bit of a squeeze to get it in the back without it bursting into the driving seat.
We are currently at Hawksbury Junction as there is a beer festival at the Greyhound this weekend and we partook of some real ale. A boat is the perfect vehicle for such events as it’s your home as well. We never seem to last as long these days as we did when we were going to the Nottingham Beer Festival where we could drink all night and have a kebab on the way home. Last night we only lasted a couple of hours before retiring back to the boat. It must be something to do with age. I’d just like to point out that Lisa flagged first.
I’ve just looked out the window and there were two men on a passing boat wearing brimmed hats. Are we being invaded by aliens?

Hey don't knock wide brimmed hats!! I have a Tilley hat which is great for any outdoor activity including boating. In fact they have foam inside so that if they fall in the water they float. Very durable and for those of us who are tending towards the folically challenged stops painful sunburn. The alternative would be something like (shudder) a baseball cap...
That aside I am very much enjoying your posts and its good to see the progress you are making.
All the best
Andrew Smith

Pete, I really can't believe your views about 'luminous jackets' and I strongly disassociate myself from them. You snobby git you!!!!

aliens... cool! Send them down here, I could do with a couple of those.

Hi, Never in a million years did i think it was possible to have sooo much fun in a mode of transport slower than walking!!

So pleased you're both having a brilliant time 'living the dream'.

After reading your Blog I had to run out and buy a wide brimmrd hat.
We're set for our first Narrowboat Holiday the first week of June, and we'll be on the Ashby Canal. So, I I had to have that hat in case we see you.

Hey, don't knock baseball hats either! They're very good at keeping low sun out of eyes. And the wide-brimmed Aussie hats keep the rain off.

Not so keen on the hi-vis jackets though.