Book burning and boilers (and Barrow)


This blog has been quiet for the last couple of weeks as we haven't moved (that's not an excuse, just a fact). But the time has come and we are nearing the end of our 14 day stay at Barrow. Zouch, then Trent Lock next methinks. This last couple of weeks, we've seen Geoff and mags on nbSeyella waiting for the lock and nbForever Young, but we can't remember where we have seen nbForever Young before. Probably the Shakerstone Festival. Talking of which, it was on last weekend and we weren't there. I'm sure they've manage without us.

Barrow upon Soar is very quiet during the week but a busy little place at the weekends. With pedalos, canoes, kayaks, rafts converted lifeboats, cruisers and narrowboats competing for any available space on the water and the lock was taking 25 minutes to fill but has since been fixed and that made an enormous difference to the locking times. We thought it better not to move at all, so we didn't.

I've taken out the old boiler from the Rayburn in preparation for the proposed new one to be bought and fitted. It said on the interweb that the job should have taken twenty minutes but, after an hour and a half, I finally hauled it out. A little rusty with a small hole on one side. Ahhh! That's why the Rayburn was so wet inside and I had to add four litres of water to the system every day last winter. It probably won't be lit until sometime in October so it gives me a bit of time to sort out the replacement. We've decided to fit and finish the kitchen this year. That might be nice. 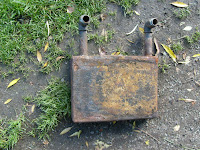 An old boiler (I know a few of those)
It's a shame that the pastor from the US cancelled his Qur'an burning event as we were planning to have our own bible burning event at Barrow (that's even got a better ring to it). I would also have considered other religious texts, books by Geoffrey Archer and Dan Brown. Hell, we'd probably have thrown a bit of James Patterson on to the pyre while we were at it. Nothing like a bit of book burning to separate the masses into the 'don't you dare' and the 'burn baby burn' brigades.