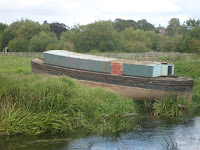 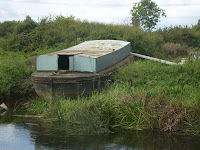 I was walking Sam around the 'unnavigable' loop of the Soar into Quorn the other day and came across this converted barge and these two liveaboards (it can also be seen easily from the A6). All of these are quite far around the loop with the barge nearly at the weir that makes this loop 'unnavigable' (which it plainly isn't). I do hope that the liveaboards don't have BW licences as they are where they are and, since this part is deemed 'unnavigable' by BW, any boats on it should not have to pay for the privilege as long as they don't enter the navigable parts. I don't think that's the case though. But it should be. There are many unnavigable loops on the Soar with loads of boats on them. 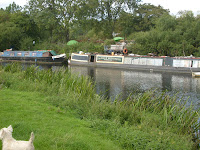 As we were getting out of the boat this morning, who should quite literally run straight into us but Geoff from nbSeyella out on his early morning run (I was going to say jog but that sounds a little too relaxed for the speed he was going). nbSeyella are on their way back to Pillings Lock Marina (Don't ask. Read their blog). Lisa was horrified as the straighteners hadn't hit her head yet and her hair looked like a bust sofa. 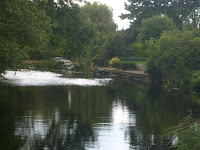 This wharf in Quorn is also in pretty good nick (unlike the boats) and was probably Quorn's own wharf for coal delivery's etc. Strangely the house built on it is called Wharf House. Weird ain't it.