We moved from Barrow yesterday and are now at Zouch. Zouch cut seems full of boats that are unoccupied with, out of around nine boats present, only three are occupied. Is this a sign of the times in that many people don't put their boats into marinas over the summer months and just move them every now and again to keep legal.

I called into Loughborough Basin to use the facilities. There ended up being five boats in that tiny basin, some waiting for the facilities and others just leaving, three of them were full length. It's a little small to have that many boats fighting for space but, no collisions later, they were all gone except for poor old Pickles, all on it's lonesome. 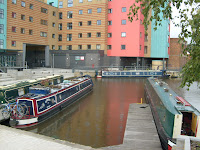 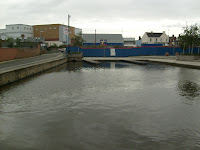 It's a tad windy around these parts. I got a little bit stuck in Bishops Meadow Lock as it's a seventy foot lock and this is a seventy foot boat. The lock doesn't like boats with front and back fenders and it kept me prisoner for a couple of minutes until I extracted myself. 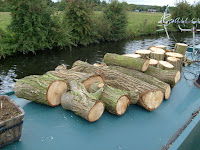 On the way I spotted a sawn off stump just before Normanton-on-Soar on the 'wrong' side of the canal. Sawn off stumps to the livaboard boater can prove a small goldmine in the form of timber for those long winter nights (which obviously just fly by). In this case, it resulted in a small haul of logs already sawn to a very reasonable size. So if you had your eye on them, tough. They are no more. Although I never seem to have as much luck as Vic and Sue from nbNo Problem, who always seem to be recovering vast hauls of logs from the verges of the canal. Sue finds most of them whilst walking the dogs and not from the boat. I need to walk the dog more often. Sam would probably agree.