We woke up this morning with Lisa claiming to be hanging on to the bed sheets by her fingernails trying to stay on the bed. Since I am on the outside I found it a little hard to believe. Once up she let out a yelp as some bottles rolled across the floor. I reluctantly got up as Lisa told me we were at 45 degrees. I loosened the ropes and we recovered back to normal from our 5 degree tilt. We're on a river you idiot and the Soar has tendency to go down as well as up (a bit like investments). In this case it went down (a bit like investments over the last year). I keep forgetting things. Not the proper actions of Captain Canal.

Below bridge 25 this boat is slowly being overgrown, at least it looks that way. When I look at this, and the new housing development behind it, I imagine a 'Local Hero' moment. The developer wants to buy the land and wharf and the grizzly old boat/land owner doesn't want to sell. Burt Lancaster enters Fulton Mackay's cabin and they enter into negotiations. Unfortunately real life never ends up like the films and, in this case, the development went ahead anyway and a fence was built to obscure the view of the old boat from the new homeowners. 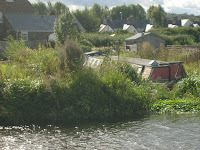 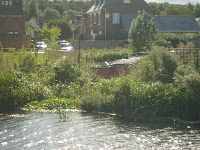 As I write this, a fisherman has just pitched up to the front of the boat, threw his line in and hauled out a thirteen pound pike. I tried to take a photo but, as expected, the battery failed on the camera and this was the only photo I got. 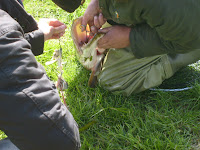 Lots of pirates around today. Might be the weather.