Heads it was, so we've decided to turn right. The Soar is a little in flood with some locks in the red and most in orange. Someone (can't remember the name of the boat) said that they had an aggressive bollocking from a BW employee for going through on red as they didn't have the right insurance. That really is the modern 'don't do anything 'cause it's too dangerous' excuse for not doing anything. Anyway, they were reluctant to go too far with the flood situation (and the agressive BW employee situation I should imagine). I do wonder if the chap had been steering instead of his wife, would the BW geezer would have been so aggressive. Past experience with bullies suggests not. Last year I ignored all the red lights and had a whale of a time on the Soar. 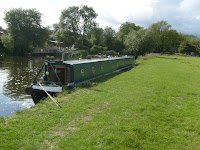 Freedom for Pickles No2
We left at around midday and found our way to Mountsorrell where there is a brilliant pub called The Swan. Below the lock we met up with a new coal boat. This was Star Class Carrying run by pleasant chap called Mark and his family. Apparently he bought the boat, nbCallisto, in February and did all the work to get it ready for carrying and serving diesel and coal and is currently on the way to the Shakerstone Festival before starting in earnest the winter run. Currently diesel at 69p so I got some. 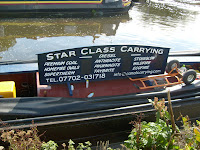 As it says on the sign
He has plans to do the coal run on the Grand Union to Wigrams Turn, Leicester Section, Soar, Trent and Mersey to Fradley and Erewash. That is a large network and I have no idea what his turnaround would be, but good luck to him. I know that nbHadar was trying to to the Soar last year before bad luck prevented it. 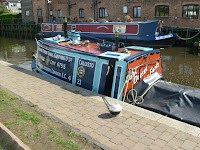 It's a working boat that actually works, 'init.
I think we'll stay here the night as the weir at Silby Mill is running quite fast and winding Pickles may not be such a good idea in fast flowing water as we have both forgotten how to work things on the canals. Today Lisa stood by a lock gate unable to work out what to open first and I was appalling at steering nearly hitting a boat at Barrow. It can only go downhill from here. Here's hoping. 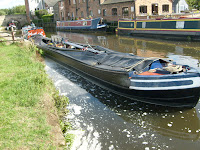 Glad to hear all is well with you all. Was interested to read about NB Callisto and her coal and diesel run for the winter.
Is she doing the whole of the Leicester Section or just the Soar, because Keith and I do from Crick to Kilby Bridge, taking in Market Harborough, and Welford.
We managed to do our coal run last winter even though Keith was very poorly and are already sorted to do it again this Winter. At the moment we are taking a very slow cruise back to the Leicester Section, having enjoyed sometime out and about.
Happy Cruising.
Jo

Hi Guys,
Nice to see you back in the real world!
regards
Graham

When speaking to Mark from Star Class Carrying, he was certainly aware that you were selling coal on the Leicester Section last year but I don't think he knew you were going to do it this year. He will also be incringing on part of Gosty Hill's section on the GU.

His proposed route is very long but I also think that he can justify selling on your area by the fact that he also sells diesel.

However his turnaround times will not be frequent and, as you are no doubt aware, frequency of delivery and regularity is important to customers. I do believe that after his initial year his route will be reduced somewhat to something more manageable.

Graham
As opposed to the unreal world I imagine. Where is this real world you are thinking of?

Oh dear, I think it might be here. Nice to be back though.

Hi Pete. Nice to hear back from you.

We are not to worried, as I am sure we can sort something out when the time comes. It is after all a free country. I have e-mailed Mark letting him know that we are on the Leicester Section, with a hope that it will not upset his operation. I am not into confrontation and hope that we can work together. The fact that he does sell diesel, may cause an issue with the number of marina's on the section. But once again it is a free country. We know that BW only want a small amount of people trading on the section, because it is so small and that is why we had to go through them first to get permission to trade on the Leicester Section. As for going through Gosty Hill's section, I am passing no comment, but to say I wish him luck LOL.
Are you going to Shackerstone this year??
We may be going down on to the Ashby, not sure yet, as we have time to kill.
Happy Cruising, see you soon maybe. Jo

Just put a comment on your 'Oxford swimming disaster' post, and wish to enlist your support for the removal of abomination at Isis Lock Pool,Oxford.