At last the Rayburn is in place and semi-cleaned up if not plumbed in yet. It took six men of various ages, some of whom I thought wouldn't get off the boat alive due to possible cardiac arrest. All survived and left my boat without my need to knock up a pine box. There was too much going on to take photos. My framework, that I had lovingly made up for the Rayburn to rest on so it would be above the lip at the door, was eventually found to be too tall as I hadn't measured to the top of the flue box. We had to do a bit of wrestling. 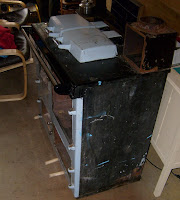 Note the cut down broomsticks to move it. 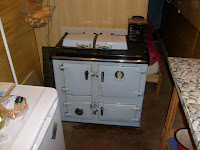 That's it. In position. A bit of cleaning and derusting to be done.

Tomorrow I have to fit the flue pipe and cut the hole in the roof for the roof collar. I've done it before for the other stove so with a bit of luck, it shouldn't be a problem.  Then again... Tuesday it's the gravity fed pipework to the towel rail. I have my doubts as to how that one will work.

Your "frame work" Was that the wooden creation that was on the roof on Friday when we passed.

It was indeed. Now available as a piece of modern art for a very reasonable price. Alternatively firewood or, more likely, as batons to mount some trim pieces.

That's going to be quite a cosy little corner! If you get it right you should be able to melt the snow outside for a good 10 metres!

It's unfortunate that Lisa isn't on her schools as she's missed out on the de-rusting...

Of course, I meant School holidays...

As someone said to me the other day, "Well, you don't want to be cold, do you."