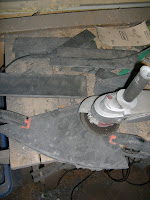 Over the last couple of days I've been playing around in the toilet (according to Lisa). I have, however, been laying tiles on the toilet floor. Well when we bought them we thought they were tiles (that's what was on the label). The Welsh have a lot to answer for. I don't mind taking the Mick out of the Welsh and all things Welsh but it seems that they are having their revenge. What we have actually bought is Welsh slate and it's made of hardened steel. 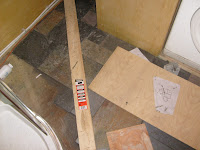 When we saw it, we thought that I had all the tools and bits and pieces for laying 'tiles', and I did. The problem is that Welsh slate is not ceramic but is a fine-grained, foliated, homogeneous metamorphic rock derived from an original shale-type sedimentary rock composed of clay or volcanic ash through low grade regional metamorphism (Many thanks to Wikipedia for that). To the unscientific amongst us that means, 'dead 'ard'. After breaking all my tile nibblers, cutters and saws I resorted to the angle grinder with a stone cutting stone. The back of the boat is now covered in a fine dusting of black Welsh slate. 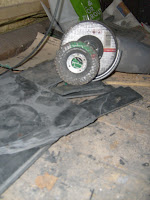 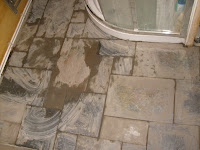 That's not a bad job. A bit of cleaning and polishing and that's it.

Look at the way it effortlessly curves around the shower.

I bought four 12v batteries the other day and they have transformed our lives. You forget the difference good batteries make to your megre existence on the canals.

Lovly should last for years

It may look good but the proof is in the showering.

It better last for years 'cause I'm not doing it again.

We are heading your way, now at Sutton Stop.
I am also in need of a new set of batteries. 1 dead cell

One dead cell rings a bell. Also one duff battery dragging the rest down. Multicell is just up the road from here. £70 for a fully sealed 110Ah battery. I haven't got the best record of battery maintenance so I thought it a better buy rather than wet cell.