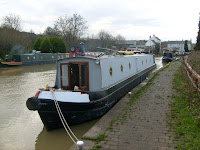 It was our intention to make our way through Leicester this weekend but, but we missed our Friday run to Syston due to the Soar being in flood again. However today the flood had receded and we began the journey from Mountsorrel to the other side of Leicester without mishap, getting our monthly allocation of fuel on the way. We also ran out of water yesterday and the tap at Syston had a boat parked in front of it so we still don't have any. No problem. We'll fill up tomorrow at Kilby Bridge. The problem with the river is you are at it's mercy and I'm glad to get back onto the canal system again although we haven't had to break any ice due to the constant movement of water. 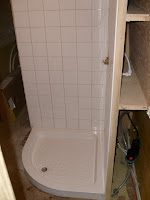 The shower is now fitted, tested for leaks and I am finishing the grouting and fitting the enclosure this week. It should be up and running by the middle of next week with a bit of luck. Not much good without water though.

Since Lisa was feeling a little better this week, I convinced her that it would be therapeutic to go out for a pub meal and she reluctantly agreed. We were however very disappointed with our choice of the Waterside at Mountsorrel. The beer was unkempt, the first glass of wine was undrinkable and the atmosphere was straight from the seventies. The food arrived and was severely disappointing as it said on the menu that it was not fast but slow and home cooked. No, it certainly was not. It was bought frozen and microwaved on the premises. We don't eat in restaurants and only compare pub food with other pub food and know the difference between bad pub food and good pub food. This was bad pub food, hardly adequate and we ain't eating here again.

We are currently moored at Blue Bank Lock near Aylestone and Fosse Park where everyone is frantically doing their Christmas shopping, shouting at the kids, worrying about where the money's coming from and looking despairingly at their spouse. I'd rather be here thanks.

If you got really drunk first, then ate, you may find it was actually really nice food...

Nice shower, by the way! And what colour will you be painting the boat soon?

Unfortunately the beer was undrinkable otherwise I'd have drank (drunk) more.

Green. Hell, they're all green. That or red or blue. We really wanted a stone finished thingy so I'm told but ran out of money. Mayby next year.

Sounds wonderful to us, still havent moved the boat yet or put water in it, unfortunately we are the people at Foose park getting stressed about Christmas!!!! Think the guys at the Marina are getting touchy about us being parked in the brokerage bit. Never mind have started looking for a mooring.Let us know if you are free for a launch next weekend up to the water bit and then past the bridge to moor(they said we should) even though they said we were ok till after Christmas.....hey ho!!!!!xxxx Lisas not a baby or a moaner(eh lisa lol)

We're good to go next weekend. We'll get that stern gland sorted and head down to Bridge 22 for your inaugural voyage. Sod them at the marina. Keep it there as long as possible.

Lisa was very good today and worked through ten or so locks without complaint. ("you can take that broken bottle away from my neck now Lisa")

Bet you still bloody drank it!!!!

Bet you bloody drank it though :) xx