Even more bloggers have arrived in the form of Derwent 6 but they didn't hang around and made their way straight down to Debdale for the Christmas period so I don't think they count towards the bloggers numbers at Foxton.

We are a Christmas free zone here on pickles No 2. We even switched off Radio 2 the other day due to the abundance of Chistmas music (if indeed it can be called music). No imitation tree complete with LEDs, no fire hazard decorations, no tinsel hanging from the ceiling, no flashing
snowmen, no plastic santas, no nothing, not even any cards as none have been forwarded to us.

Listening to the Today programme this morning I find that Richard Dawkins is not the person I thought he was and can be found celebrating Christmas with everybody else. There's me going out of my way to give credibility to my atheist credentials when the God of atheism is singing carols, tucking into turkey, opening presents and generally having a whale of a time. I'll be putting my hair shirt away this Christmas if that's the case.

We had a marvelous couple of pints at Bridge 61 pub at Foxton Locks. We went up for a quiet Sunday afternoon pint and that's the way it started. In the bar were the crew from nb Matilda Rose, Graham and Jill, who we did not know, but earwigging, I realised who they were. It's much easier to tell who the the crew from a boat are when you see them pass earlier in the week and they have the name of the boat in big letters sign written on the side, unlike Pickles No2 which is quite anonymous and looking at the photo on nb Balmaha's blog, decidedly scruffy. Although it's nice to have anyone's admiration (thanks guys).

Anyone who knows the bar in question knows that it is quite small and without music, everone can hear everyone's conversation and as a consequence, gets to know everyone in the bar quite well. Graham introduced his dogs, Baxter and Muttley, but we said that we already knew as we read the blog. Introductions made we had a couple of pints with he rest of the Foxton Boating community and locals alike until we ran out of money and had to return home. 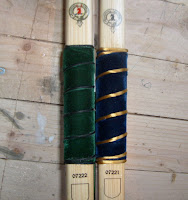 I have finished the two longbows I have been working on for the past week or so. The process should be easier from now on as I can now remember the measurements, construction details and I now know where all my tools are. Are these the first two Victorian pattern English longbows ever produced on an narrowboat? I'd like to think so.

I just need to find buyers for them.

We've had several visitors here since we arrived at Foxton. Both Dave and Bob bought me a pint as Lisa was not here. I would like to thank them and apologize for the fact that I never have any money as Lisa keeps such control over it.

Hi Guys, I am only allowed to return to the same location twice the second time I am made to apologise for my actions, garilous nature and loudness(too many years on Helicopters). I hope I did not spoil your quiet Sunday afternoon pint, if I did I shall place the blame strongly on Rosie's shoulders. Hope you have a lovely Christmas,
regards
Graham and Jill

I too listened to Richard Dawkins with surprise this morning. In my humble opinion, it would be good if more atheists ignored Christmas as you are doing instead of hijacking it with commercialism. After all, if you have no hope in Christ and have not experienced the reality of his love, peace and joy, what is there to celebrate?

Hi Jill & Graham. It's what Sunday afternoons were meant for. Season's greetings.

Jan. I absolutely agree that the commercial side of Christmas is appalling and we have little to do with it. However I must take issue with your presumption that we atheists have nothing to celebrate. On the contrary we have everything to celebrate including love, peace, joy and something else, rationalism. Thank God for Rationalism. Just a thought for Christmas.

However, this blog is supposed to be a light hearted view of the canal system with my thoughts, and only my thoughts, thrown in for my own indulgence and for anyone else that may be even slightly interested.

I wish you, all Christians, all Muslims, all Hindus, all Jews, all Buddhists, all Sikhs, all Shintoists, all Scientologists and all other religions, or none at all, a very merry holiday full of love, peace and joy.