Shower, stern gland and falling over 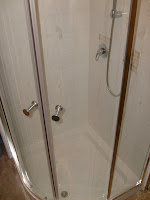 The shower is now working, not leaking and we are loving it. Admittedly there were a few false starts with water leaking everywhere, flooding my workshop and the bilges but that's only to be expected really. Having not had one for some time has made us appreciate it even more and ensues that we spend more time taking one. In fact it's difficult to find Lisa when she's not in the shower.

We are still at Kilby Bridge but are moving towards Foxton on Monday, maybe in one jump, maybe two. Lisa finishes school on Friday next week so we will be able to have a bit of a holiday on-board for a couple of weeks. We have had no signal since we moved 100 metres back from the 48 hr mooring to the 14 day. Absolutely no explanation for this but it is now back to normal again and we haven't moved.

I fell over on Friday night heading towards the Navigation pub. That's right. Heading to the pub, not heading back. I had just put on some clean jeans and a fresh t shirt. This is the fourth time I have fallen over in two weeks. Is it an age thing or is it that I just can't control my body and keep my feet directly under my centre of gravity. It tends to be slipping that does it and I find myself hoping for frozen ground as I tend to be able to stand up when it's solid. It was raining last night so I can't issue general assurances that I will remain upright all day today.

Lisa and I had a good day yesterday. We visited our friends, who had just bought the Springer, to repack the stern gland and for the maiden voyage. The stern gland was a messy, greasy job not helped by the fact that we had bought 8mm packing instead of 6mm. It fitted after a bit of a struggle and we were off on the maiden voyage. Nev is a natural at the tiller and completed the trip without mishap. We duly issued his official boat drivers licence on return (I'm fully qualified to do this). On the trip we met Ralph who we used to moor next to on the Ashby and who we were hoping to get a winter mooring with. He had in fact got hold of one in the place he had wanted. Good on him. It was good to see him again. We'll be back in the area around March time I should think.

well what a good teacher you are Pete, you should be at our school especially in the Centre
you could issue the students with all sorts of instructions, they might listen to you. Nev said "an excellent piece of nautical mechanics considering you have never done it before." Cant wait for the next visit to us... or us to you, then we can toast the IVY MAY and NOT with a cup of tea xxxxx

Maybe you should drink tea - you may manage to remain upright!

It's amazing what you can do with a bit of greased string, a screwdriver and the heavy end of a socket used as a hammer.

Merry bloomin' Christmas. I hope the implication is not one of alchoholism.