Iced in (no chance) 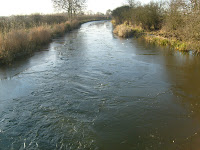 Today was a bit of an adventure as this was our first experience of travelling through ice and it ended up being quite thick ice to boot. We hadn't noticed that the temperature dropped to minus five degrees last night as several bottles of wine had been consumed (mostly by Lisa of course). This morning we were greeted with the canal frozen over. With my usual cavalier approach and disregard for weather conditions, rules of nature and the laws of physics, we were off at nine o'clock.

The centre rope was frozen solid and 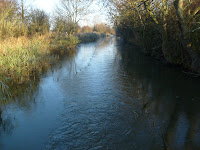 just perfect for the Indian rope trick. It took several attempts to leave the mooring with the ice holding us in place. Initially the ice was about 15mm thick and I thought that it would melt during the day. Oh how wrong I was. It got thicker and we rode up on to it at some points only to crash through again. The blacking has suffered in that there is none left below the waterline. It looks like it has been surgically removed. Even the rudder has reverted to the grey primer that was under the black. We are taking it out in February or March for blacking anyway so this is only a short term problem. On the up side there is no algae growth under the waterline. In fact it wouldn't surprise me if the metal was a little thinned judging by the noise we were making on the journey. We were a source of entertainment all day with people hanging out of windows and stopping on bridges to eye up our progress.

What do you call three narrowboat bloggers in a row? (I don't know, I'm asking you) Well that's what we are at Kilby Bridge, Sue and Vic from nb No problem, Geoff and mags from nb Seyella and us. And a lot of dogs that seem to accompany us all on our adventures. Funnily enough they all seem to get on very well. Sam, not unknown to be a snappy alligator at times, was playing around with the rest of them like she had met them all before. It makes me think that Sam is on the interweb when we both go to sleep, communicating with all her doggy boat bloggers.

When we arrived here we got the water as we had ran out two days previously and had to moor up on the other side from the water point. It took quite a bit of ice smashing from myself and Sue and rope hauling from Geoff in order to get us close enough to moor up properly. We also had a tour of Sue and Vic's boat. Lisa now wants our boat finished by the weekend. No problem.

My editor has told me to mention Sue's jam. And very nice it was too.

What an exciting adventure! I must admit, I was happy just to look at the ice from inside our boat... and not to move a muscle!

There's no point in having a boat and not using it. Anyway, no matter what I do to it or how much I abuse it, it'll still be a big metal boat long after I dead and buried.