We couldn't move from here at the moment even if we wanted to as the flood lock is in place and the water's up. The Soar is really quite impressive when it's like this. We're on a canalized part of the waterway and should have no problems with the levels although a boater on the winter moorings said that BW had only just fixed the flood lock as the last time the levels were up some of the local fields were flooded not pleasing the farmers.

We were at one of Lisa's friends divorce party last night and this was a first for me. To top that it was a Sikh divorce party. It really was a wonderful get-together as some of the major religions, Jews, Muslims, Sikhs, atheists and Christians (why don't atheists get a capital letter?), were in evidence from the assembled twenty or so and nobody started a fight. Well I say nobody but I did have a disagreement with another narrowboat liveaboard over non-licenced boats. There was even another Irish person there. 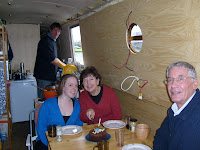 The image here is not as unusual as one may suppose. I am regularly seen at the kitchen sink and have the dish pan hands to prove it.

The Rose and Crown at Zouch does a mean steak pie if anyone's interested. We were at a chain pub up the road and decided we didn't like the fact that their food looked like it was made by central catering, transported to the pub and only microwaved on the premises. We decided to go local. Terri has told us some horror stories about the meals in these kind of places as she works in one part time. 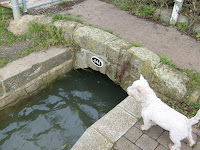 Has British Waterways policy of bridge numbering gone a little too far? Sam certainly thinks so.

Here are the promised photos of the fit out. 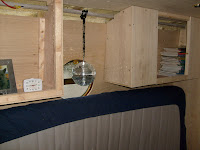 The glitter ball is not my idea. 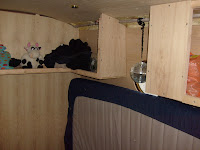 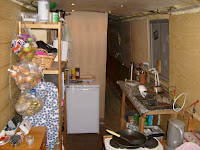 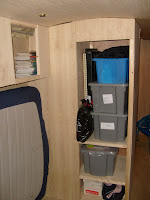 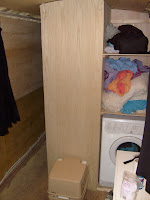 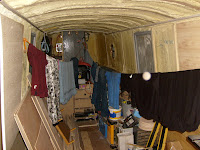 When you have a seventy footer, and it's raining outside, you can dedicate the last twenty foot or so to a drying area, stowage, junk room, workshop etc. 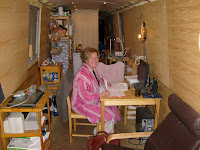 Lisa's normal weekend attire. It could be any teacher in the country working another weekend. (this is the second photo I have been allowed to use in as many weeks)

Wasn't the idea 'to fit a 70 foot narrowboat out in 30 days"? This looks like my house has looked for the past 3 years...

That was the idea but only for thirty days, but no longer. Anyway how do you know I'm up to the thirty days yet. I make up the rules here and as such it was finished after the thirty days and I'm just tinkering now.

You do live in a very narrow house though.

It's not too narrow, it's just that I have too many other things to think about (relaxing, drinking beer, reading narrowboat blogs...you know the sort of thing). After a while it just becomes finished even though it isn't!

Can I just say, Lisa looks stunning but let's not pretend she is marking!! Boat is looking good, all recent purchases are hiding in Lisa's office. Hope to visit you soon, hang on in there Pete xx