We have been called vagabonds in the pub by someone we had told we would be constant cruisers. Vagabonds! It is not a word we had heard any time in the last thirty years but it has a romantic, wind swept and interesting edge to it. I think I'm very happy with that. Vagabond. That'll do nicely. According to Jim Shead's site, there are 14 narrowboats called Vagabond on the system. 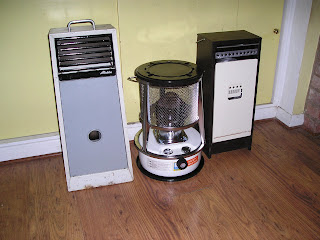 This is the first photo on the blog and such an interesting one as well. Paraffin heaters are starting to breed in our living room. These are to keep us toasty on the maiden voyage of the boat. The cylindrical one really throws out the heat. The other two are a bit like my granny's but effective nevertheless. With a bit of luck I'll actually have a photo of a boat on here soon.

We have just received the final stage payment invoice from the boatyard. This means that the boat is finished (well I hope so anyway). But, and it is a big 'but' (at least for me who wants everything now) the New Boat Company has closed for the holidays and will not reopen until the 2nd of January. This is akin to someone playing a practical joke on you, hiding around the corner sniggering and peeking to see your reaction. We may pop down sometime over the holidays to see if it's there.

Assuming that the boat will be ready to pick up in early January, due to the stoppage program and according to Waterscape, it looks like we have a three day window to get through the Tardebigge flight between the 11th and 14th of January with the next three day window on the 25th of January. We have now decided to leave the house at the end of February so either of these dates will suit our needs although the early window would obviously be much better as I can then cheat with my 30 day schedule and increase it somewhat. As I keep saying it's my schedule after all.

Sit back and enjoy Christmas,and the new year you have exiting and probably tiring time ahead of you in the new year by the sounds of it,merry Christmas and Happy new year to you.