I haven't been looking after the blog lately as we have been at Trent Lock for the past (almost) three weeks and all that time was spent on 48 hour moorings. Aren't we real criminals. And you know what, I don't care. So put that in your pipe and smoke it. It's not as if there were loads of boats clammering to get onto our spot. We were, for the most part, the only people on the river with a couple of exceptions including bloggers nbForevermoore and nbBalmaha.

One of the days we were there, I decided to do a fuel run up to Sawley Marina. The floods had mostly subsided but it was still a rather slow journey. Approaching Sawley Lock, I was about 50 metres from the open lock gates when they started to close. I waved to the people operating the lock but to no avail. After mooring at the lock approach I walked up to the lock they were operating and called, "Good morning" but there was only a stony silence and their eyes avoided mine. Sensing a game afoot, I repeated my greeting but alas with the same response. "Yes, better not catch his eye had we", I called out. Again no reaction.

Fortunately for them there is the parallel lock that I could operate. As they were leaving I called out, "See ya", and indeed I did. For they were also on their way to the fuel point. This gave me the opportunity to moor at a waiting area just to their stern and sit on my roof smiling  at them while they were filling up. As intense as they were before, their intensity doubled with fiddling about, dropped ropes, unnecessary revving to get away and more eye avoidance. And the boat name, ohh I shouldn't really. nb NicNac (Did I really write that or just think it).

We bought a new stove glass and a new chimney this month. Both look remarkable like the old ones except, well, a little newer, and the new glass isn't cracked. We are also getting on with finishing off the kitchen and it now looks like a display at Ikea with all the pots and pans hanging from hooks. We even have our very own blackboard. Lisa's idea (she is a teacher after all). I was a little dubious but it is proving itself very useful. 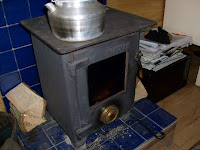 Told you it looked the same... 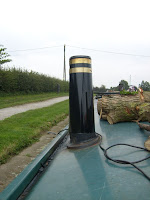 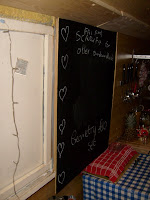 Blackboard, white side hatch
We are currently in Nottingham having spectacularly failed to get a ticket at Trent Lock. Hopefully we'll have better luck here. Nottingham Beer Festival this weekend and we have to go on the Friday and the Saturday nights as we are meeting friends (yes we actually have some). From here we are heading down the Trent to Newark next week to meet the outlaws. I'm really looking forward to that.

I note this morning that BW is to be disbanded and the waterways to become a charitable body. We'll see.

Nice to see nothing changes, all en song, I certainly would look the other way just in case they saw I was 6ft 4". Why do they bother boating?

I believe that they boat merely to keep me amused. I'm not really that threatening. It's just an interweb persona.