I hate hair straighteners. Lisa has naturally curly hair and she thinks that it should be straight. When she came back from work I expected to get out before the queues started and into the festival but no. That hair had to be straightened delaying our progress by an hour (Lisa will say only half an hour). Even then she insisted that it wasn't right and wore a hat. Consequently we were in the queue, in the rain for an hour and a half when we could have been straight in. Needless to say that I wasn't talking to her whilst queueing. But the mood lifted with the purchase of the first ale. It usually does. 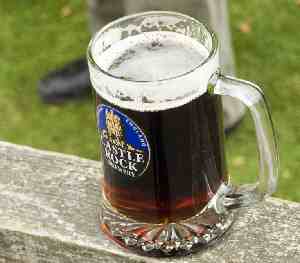 Beer
"It's too big," says Lisa. I think she was talking about the Nottingham Beer Festival. And indeed it is. It's lost it's mojo (whatever that is). The beer has been left behind and it is the event itself that is more important. The live music is in a different tent and they no longer have faggots and peas for sale.