We've been to Newark and back. We spent a couple of days going down the Trent, spent a couple of days there and came back again (surprisingly). There's a castle there you know. I say a castle but it's really only the front wall of a castle but that front wall fortunately faces the river so looks like a complete castle (at least from the river). It also makes for a better photograph than if the other wall was the only one remaining. 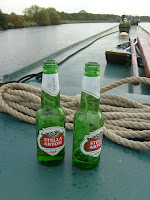 Beer (well it'd not really, is it. Wifebeater's. That's what Terri calls it. I call it rubbish)
On the way down there we saw a fisherman feeding a magpie that had landed on his arm and on the way back we saw another fisherman catching a flying pigeon with his line. A strange place, The Trent. We got into a tizz at the first river lock when we found that we were supposed to tie the boat back and front and not just with a centre line but were experts by the end of the return journey. It was also nice to have the locks done for us by the lockeepers. 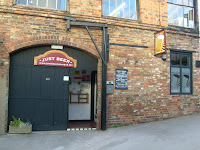 Just Beer
Carrying on the beer theme from last weekend, we also had a couple of beers on the way, whilst there and on the return (just a couple you understand). Highlights were The Unicorn at Gunthorpe with the £10 for two meal and then Fiskerton with the Bromley Arms. But the best was a micro pub called, Just Beer in Newark run by some CAMRA members who only sell four different real ales and one cider. No largers, no alco pops, no soft drinks, no jukebox, no music, no TV, no gaming machines only fine company (well it was when we were there) and fine conversation (ditto) and really, really great beer. Behind the pub/restaurant called The Moorings by Newark Nether lock if you're interested. It was about the size of someone's front room but far Superior in terms of atmosphere to most larger venues. 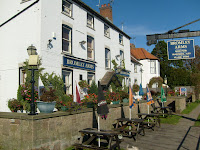 Bromley Arms
Lisa also bought a newish bike from the weekly auction in Newark. The total cost of which was...eleven quid. Not that she ever uses a bike but she feels that she may some day. Possibly soon but more than likely not. I wanted some timber that was on sale but that was sold for more than I was prepared to pay. Unfortunately I wanted to pay nothing for it. I was outbid. 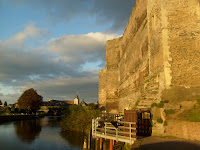 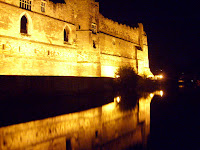 Front wall of castle and river (and at night)
We're starting our return journey to the Ashby Canal this week and may be back next weekend (well there or thereabouts).