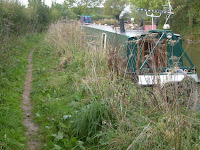 Steve on nb Albert was complaining on his blog the other day that contractors are cutting the towpath edge where it was not necessary. Well it might be nice if he sent them to the Ashby Canal as the edge of the towpath here could do with a good cutting. It doesn't look like there has been a contractor here since the beginning of the summer. I know that they normally cut around here twice a year and it must be due soon. It better be or we won't be able to find the canal soon. Even worse. I won't be able to find Pickles. I knew I shouldn't have painted it green. I'm now thinking of issuing Lisa with a machete so she can get back to the boat after work.

I changed the oil today on the Pickles' engine and judging by the colour of it, I think I should have done it sooner. There again, we have owned a little Ford KA for about seven years and have never changed the oil on it. In fact we've never done anything to it. It's going to give up the ghost sooner rather than later, but that will have nothing to do with the engine but bodywork rust and general decay. The engine starts every time and sounds perfect. So there you go. The moral of the story (if there is one) save yourself a fortune and do no maintenance whatsoever. It's all a complete waste of time.  moneysavingexpert.com, eat your heart out.

My motorbike should have 1.2 litres of oil in it. I recently changed it after some time and found that only half a litre came out.

But think of the money you saved by not changing it. Bikes tend not to do much mileage over their lifetime (BMWs excepted) and the next owner will never know.

My first cars, mostly 1100s, used so much oil that with the amount I topped up every so often I reckoned I changed the oil as I went along. I hate to think what the filter was like!