We went for a drink with one of the local liveaboards the other night and were sat outside when another boater who we know, came outside for a ciggie. We started talking and he declared that he was a member of the BNP (I've no idea why they all love to declare this to anyone who'll listen. I would never mention my political beliefs unless it was relevant. (OK, that's not entirely true. It's not true at all really). Well not really a major surprise around these parts. But  we were guilty of then taking advantage of the situation and asking difficult questions like, 'What about the Irish, scots and the Welsh over here. Should they be sent home? (according to the BNP website they shouldn't) Our BNP friend thought that they should. Our liveaboard friend, knowing where I was originally from, started generally taking the Mick. Laughing at the afflicted.

You've got to feel sorry for these people as they have constructed their own reality and live in a bubble away from the rest of us. Well I say you've got to feel sorry for them but only to a point (a pretty sharp point I think). I'm all for people thinking for themselves and forming their own opinions but I wish that some would think for themselves with a little more information and available evidence rather than nonsense, bigotry and misplaced patriotism. And please don't impose this nonsense on others you hardly know. 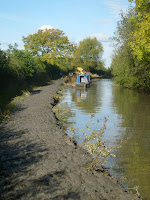 What's happened to our mooring?

You pop off for a couple of days and BW arrive and dig up your mooring. Well it's not technically our mooring and they haven't technically dug it up but as we are constant moorers cruisers, it's a little annoying. Yes, I know we're the scum of the earth but this kind of thing is annoying to us scum none the less. They have been dredging the Ashby since we came back this way and are slowly working their way to the terminus doing about fifty metres a day. It's all a bit of a mess really but long term it is all a good idea. Behind the piling, there are a lot of holes that do need filling as they can be very dangerous. If you step off the boat you may end up, up to your bits in canal water. 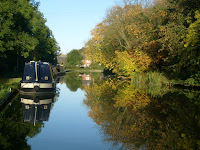 Isn't autumn lovely. This is the view from our front door.

We've just bought a solid fuel fired Rayburn. We now just need to have it picked up, delivered to the boat yard, placed into the front deck and drag it inside and installed. Shouldn't be any problem. It only weighs 320 kgs. Whatever that is in pounds.

As we were bidding for it, our internet signal died and we had to scramble out of the boat and head along the totally black towpath to the car and then to a decent signal area. In the melee I had 'done me back in'. As we were bumbling up the muddy towpath a boat came around the corner and hit the bridge, switched on his headlight and blinded us. When it passed we were night blind and couldn't see a thing. The remainder of the trek to the car was like stumbling around a coal house at midnight looking for the proverbial black cat and Lisa shouting at me to stop moaning when we missed the gentle slope to the car and proceeded to climb the adjacent mountain. We eventually found the car and sped away to find a 3g signal and to make the winning bid. Phew. Whoever said this boating malarkey was easy.

Is it in yet (the Rayburn). Will there be photos of things being roasted?

I wish we'd got one when we did the house as it would've heated half of it!

It's arriving on Monday. Needs the brackets holding the back panel on welded. That's why it was cheapish).

There's a litle bit of work to do before I can fire it up. Like installing plinth, hauling it into position, flue fitting, cut hole in roof, chimney, plumbing, radiator fitting and some other small jobs.

More like a third of a ton! You'll be shifting some ballast, then?

With the wind today, bit of ballast would be a good thing. It's being fitted more or less centrally. about 6" off centre. I reckon that it won't need that much ballast moved. Depends how the range itself is balanced.

Then again, I have been known to be occasionally wrong in the past. Quite ofter actually.