We are now at the Shakerstone Festival site in exactly the same position that we were in last year. We tried further on but couldn't get Pickles near enough to the bank for the boarding plank to be of any use. So here we will stay for the next week watching the arrival of everybody else and the working boats. Roger Fuller is already here with the butty Ilford but he's moored up with the plebs and not where the working boats are to be. Ilford is not amonst those who are not on the listing so I don't know if he's been thrown off the historic boats section 'cause he wasn't booked in. 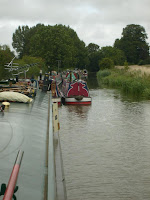 lisa has had her first day back at work yesterday and was a little trepidacious about it. I've been remaining around the boat in order to get it all ship shape and to unpack and to get my workshop up and running so I can get those bows manufactured starting next week. I have to get that income started as soon as possible.

Reading some of the other blogs, I am very glad that we are around a lock free area and that we don't have to queue up to go through. It seems that back holidays are used by marina dwellers to air their expensive toys and quite rightly so. The winter remains the domain of the constant cruisers and the liveaboards to have the canals to ourselves without hirers, marina dwellers, weekenders, occasional and weekend boaters. It's also the best time of year for canal boating in my opinion. Ice crunching is the business and separates the sheep from the lambs, the wheat from the chaff and the men from the boys. 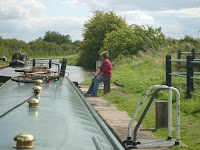 BW seem to have done a bit of a clear out of some of the liveaboards on the Ashby this summer. On the way here from Alvecote we met many boats that had been on the Ashby when we left and had been here over the winter. Some of the popular moorings are cleared of liveaboards. I realise that this is a popular move amonst many boaters (moving all liveaboards off the canals would be even more popular with many) but it takes much of the charicter of the canals away and deprives them of an eyes and ears that report many problems.

I've realised that our batteries are on the way out since arriving back from France. They only last three hours with only the TV and fridge and the occasional light on in the evening. They also charge suspiciously fast when using the engine and only get to 14.4 volts. I know they have only lasted 18 months but we do tend to abuse them as we cook with electric and run them down till we can get nothing else from them. They were also cheap as I bought them second hand from a chandlery who told me that they had been taken from a new boat whose owner insisted on gel type batts. We may have to get two this month and two next (I know, I know. It's not good practice etc, etc, etc).

Managed to keep my bags-for-life count down to 3 (all from the same store), however I'm chronically short of bin liners, rubbish, dog-poo bags etc.