There seems to be a preponderance of tall people in Shakerstone. These are locals and not visiting boaters. I'm used to looking down on people (especially people I live with) and think it's disconcerting to have to look at people on the same level or even higher. There must be something in the water 'round here. There's certainly something in the beer as we went up to the Raising Sun yesterday afternoon and with every intention in the world of returning in the evening to watch the live band, we were flat out in bed by eight o'clock. Gone are the days when Lisa and I could drink twelve pints and sing a merry song. Oh no! Back to bed after a couple of pints for our cocoa. The impromptu folk at the pub was good anyway with the occupants of some the ex-working boats and of nb Talisman talking the 'elm. 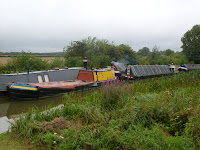 On Friday I had been working on the plywood boards which will eventually be the lining of Pickles no 2 and cutting one of the porthole cut-outs that I had marked up. I looked at the man hanging out of the rear door of the boat in front and he was obviously trying to tell me something by drawing his hand across his throat. I thought 'cheeky bugger telling me to keep the noise down. I'm allowed to use my electric saw during the day'. I looked again and he was doing the same thing. Well he's either telling me he's going to cut my throat or to stop using my saw. I went stomping around the boat all indignant chuntering to myself. 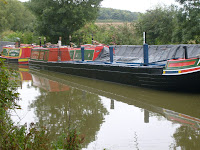 Later I found out that they had cancelled the festival and realised that he neither wanted to cut my throat nor to keep the noise down but that the event was no more. I spoke to him later and he confirmed this as he was neither carrying a knife nor wearing ear defenders. This miscommunication could have turned ugly if I had confronted him instead of sulking around the boat. I don't know what the moral of this story is but there must be one. 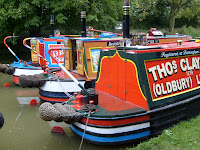 I've included some pictures here of some of the ex-working boats that attended the non-festival. As usual the boaters seemed to make the best of it and even last night in the pouring rain, the ex-working boaters were holding a BBQ on the muddy towpath under a tarpaulin. 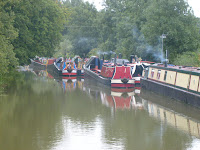