We're toying with the idea of popping (as much as you can 'pop' on a narrowboat) up to Nottingham for the Beer festival on the 9th - 12th of next month. If we do we'll start off early next week and we'll probably come back this way in a couple of weeks and complete the Leicestershire Ring on the way. We did it before when we had the original Pickles (an old Dawncraft) but I could do with a bit of a trip. Unfortunately Lisa will have to work and will be commuting during the day and I will be single handed for the cruising but I rather enjoy that.

We both originally hailed from Nottingham and moved down to Leicestershire six or seven years ago when we sold our homes. Just about anywhere on the Leicester Ring is about an hour or less from Lisa's work so that shouldn't be a problem.

I realize that this will do my bridge hopping credentials no end of harm but that's just the price I'll have to pay. 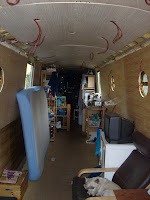 I've finished the lining with only one roof 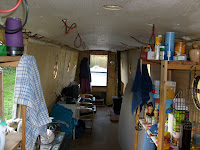 panel to go. I'll be starting the bulkheads next week and that should see the end of the ply getting in the way on the boat and will provide more wall space to pile things up against and also give us a dedicated bathroom and bedroom. Oh the novelty of normal living (of a sorts). It's just ripping along.

Well done for getting the lining out done. As you are finding out it takes time, but it will be well worth it. Have a wonderful trip if you decide to do it. Jo