Accident above the Ashby 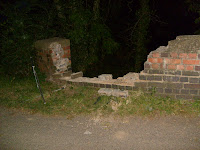 I made a assertion on my blog of 2nd Sept that constant cruisers provided a service to BW by being the eyes and ears of the canal during the winter. This has just been proved by the fact that a motorist has just crashed into Bridge 37 on the Ashby canal and I was the first one on the scene doing my "is everyone ok" bit. The driver was a little shaken by the ordeal, quite understandably, but no one was hurt. I suggested that she get in touch with the AA to get towed home, deal with all the insurance and official bits from there and that I would inform BW of the bridge damage. 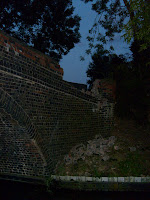 So within five minutes of the event, BW had been informed of the structural damage to the bridge. You see, constant cruisers ARE the eyes and ears of the canal, at least on this occasion. But as the situation was being dealt with an idiot arrived in a new Range Rover and the bloke inside started shouting at the unfortunate women who had had the accident stating the she could have killed his family. I can only assume that he was coming over the hump back bridge in one direction and that the unfortunate women in the other. She saw him too late and breaked, skidding on the gravel and ending up taking out the bridge. Said geezer just drove past the accident, up the road, then turned around and came back to the accident site to have a rave. He had never even checked that everyone was ok before leaving the accident site. Some people really love to abuse others in a helpless state. They're normally called bullys in my world. He had driven off before I could make my way over as I was clearing the road of debris otherwise I may have had words with him. Prat.