We've been skiing over the Christmas period as we don't really like the whole Christmas thing. Lisa, Terri and myself in a tiny apartment in Tignes, France. A superb week and the first time skiing for about five years. It was also the first time that Terri has spent a considerable time with us since she went to uni. It may also be the last as she is on her last year and will be in the job market next year. We got her to go with us by making it all inclusive for her but even that may not have sweetened the fact that she was stuck with us for a whole week. No broken legs or cracked heads only bruised egos and busted skiing reputations. I am now not an advanced skier any longer and have handed the mantel to Terri. 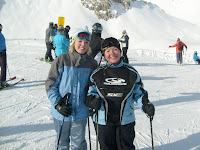 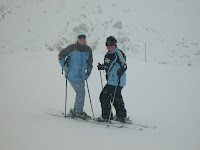 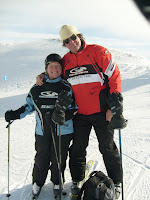 It never ceases to amaze me how ridiculous Lisa and I look together (and those glasses don't help at all).
We thought that when we got back the ice on the canal would have melted but no such luck. Still nobody is moving. One of the other livaboard boats is up for sale but I don't know if it is related to the current iced in situation but I wouldn't be surprised. It's all a little depressing, well not really depressing but a little anticlimactic after the pristine environment of Tignes). I had drained down the water system but didn't do the central heating and one of the connections had expanded and broken. Half an hour after getting back on board the fires were burning and the joint had been fixed from my vast box of spares. Other than that, no problems except the four hour delay in getting the boat back up to heat.

We did nothing over New Year only drink French wine and beer. Very comforting.

Hope you had a great trip but I have to say you were missed. Happy New Year and big thaws to you all.
Lisa

I didn't miss 'er. She never left me (if only). No thaw in sight unfortunately but I'm sure it will be a happy new year (at least Lisa tells me that I ought to be happy).