Lisa's been complaining of a bad back lately and her symptoms are exactly the same as mine when I have a bad back. I am, however, a little sceptical as she has been watching me with a bad back for years and I think she's just after the sympathy vote. Anyway, she's too small to have a bad back as she doesn't even have a back. 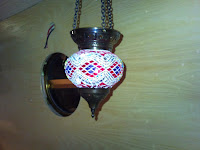 We've gone all Moroccan
I have failed in my abilities as responsible for the maintenance of the working parts of the boat. We ran out of diesel the other day and the primary filter was clogged up beyond help and I didn't have a spare. So I cleaned it out in clean diesel and hoped that would last a couple of days until after the holidays and I could get another. Unfortunately my technique for bleeding the fuel system was incorrect (as I later found) and, with the blocked filter, by the time the fuel was just starting to enter the system, the inadequate starter battery was finished. And there was nothing left in the leisure batteries either. So we ran out of energy and with the generator not working correctly and not allowing me to charge the starter battery, we were stranded without our electricity generator. Any solution was going to cost just under a hundred quid so I decide to cut my losses and call RCR in an attempt to get maximum chance of starting for my money.

The chap duely arrived and sorted the problem and I got a second hand starter battery to boot. Excellent service and we aren't even members although we did promise to join, which of course we will. I even got a free course in properly bleeding the system for when this happens again (which it surely will). He even said my wiring was good (on second thoughts, he was probably drunk). Highly recommended to one and all although wait until your first breakdown then join over the phone.

I've finally clad the front inside of the boat with timber, in this case t&g. It looks a lot better than the old look of yellowing spray foam insulation. That was looking a little tired. So last year. Next, apparently, I am required to make the steps into the boat, a coat cupboard (a coatboard?) inside the door and a small table opposite. 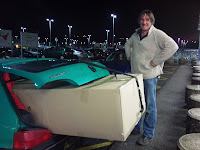 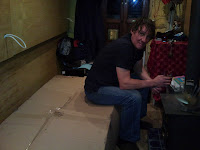 I've had enough and need a glass of wine 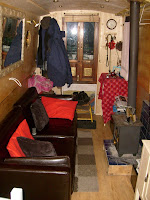 It always looks better in the morning
We've now bought a new leather sitee/sofa from Ikea for £160 and got rid of our chairs. It was the perfect size for the boat and was easily fitted through the front door. At least it was after we had man-handled it down the towpath (I can say 'man-handled' as Lisa took no part in this activity). We left the store with most of the sitee/sofa hanging out of the back of our little Peugeot 106. Well, we have in the past, moved house in smaller cars than this. It was too heavy for Lisa so she dropped it as soon as we got in from the car to the towpath. I tried to get it on my head but it was too large. So, since I was on my own with Lisa only taking photos, I decided that the hundred or so metres to the boat could only be completed by wheeling this giant cardboard package down the muddy towpath end over end. I can't say it was my finest moment and I wasn't best pleased but was grateful that it was dark with no moon. But at least it wasn't raining. I also had to disassemble the cratch to get it in.

Is it called a sitee or a sofa? Are they the same thing? Or is it a couch? I really don't know. Lisa calls it a sitee but that must be sooooo working class it can't be right. Any ideas?

I have since been informed by Lisa that I have misspelt 'settee'. I always assumed that you sit on it so it must be a 'sittee'. I may be a higher class than Lisa but I still can't spell.

Saying that, you call it a settee as well as Loisa so you know what class that makes you. Oh dear. I don't think we can be associated any longer. Sorry.

Spray Foam Roofing Systems provide many benefits to building owners. The two most important benefits is the value of the seal / leak prevention and insulation.