I've always wanted to be a geek. I believe that I would have been an ideal candidate for 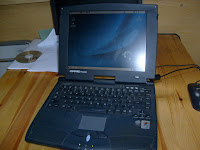 geekyness except that I am neither intelligent enough or dedicated to anything in any way (except Lisa of course) nor do I have any form of autism (a prerequisite for some forms of geekyness). I have dabbled in the past with Linux, a computer operating system, but the last time I tried it, about six years ago, I couldn't get USB to work or an Internet connection nor various other aspects of it so give it up as a bad job.

(Stop reading now if you are either a technophobe or think computers are Microsoft. Your head might explode) 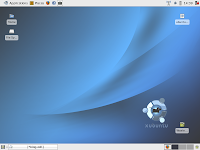 ve tried again with the latest version of one of the distros (distributions) namely Ubuntu Linux (or rather the lightweight version called Xubuntu Linux). This is brilliant. Everything I have tried is plug 'n play including usb, mouse, camera, printer, dongle, kettle (ok, ok, not the kettle). Everything just works. On this old laptop (Compaq Presario 1200XL), I was using Windows ME and it kept locking up, crashing, was slow, was fragile beyond belief with many features that didn't even work anymore. The laptop is now fast, stable, efficient and capable of much more than it was ever capable of under MS Windows. Linux really is ready for the mainstream this time and best of all, it's absolutely free. Since the laptop is now not going to the great laptop graveyard in the sky, I've even ordered a new battery from ebay. When I installed the software, it told me my battery was old and would not hold a charge. I already knew this but was amazed when it mentioned it.

Maybe this is why Microsoft have now got all those ads ('I'm a PC') running on the telly. Scared that people may wise up and not actually buy their overpriced products. I'm now proud to say that I am a Linux user and I don't even need to be a geek.

Having Aspergers means that I have OS X, Linux and Windows on one Apple laptop (though I only work in OS X). I do like the way Linux is slowly becoming 'mainstream' (OS X is a form of Linux, the $100 laptop scheme is based on Linux and even Dell are selling machines with Linux installed.

Good job for getting it all running. I wonder if I should install it on my wife's laptop...

I love Ubuntu. For those who wish to try it, it can be installed from inside windows by using a program called Wubi at http://wubi-installer.org/ It's free, as all Linux should be, and if you don't like it (I can't imagine someone wont.) it can be removed using Windows "Add/Remove Programs."

Carl, you are a geek. Just keep an eye on your wife's head.

Bill, Ubuntu can also be run from the live cd without installing anything. Here is a good handbook for installing and running Ubuntu and how to do all the above. Well written for the newbie.
www.ubuntupocketguide.com

I've had Ubuntu running on my Dell X300 Latitude laptop for a while now, as dual boot. I find that it is becoming rarer and rarer that I boot into WinXP (I only keep XP on it as I have 2 programs that I can't find Linux equivalents of).

I even ordered the free Ubuntu install CD, just to get the stickers.

I too have ordered the free cd but I didn't realise you got stickers as well. That makes it twice as nice.

I would love to get away from Vista!!*****
Have tried Linux Ubutu but find that my T mobile USB modem will not work as it is designed for MS.

I too have a t-mobile account with a Huawei E220 dongle and it just plugs in and works. It asks which provider I'm with and I can get connected.

You could try plugging in the modem before booting up as this seems like a fix.

The usage info is not however displayed but this is available and there is some other info available at: