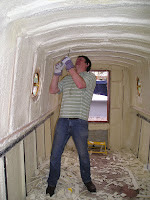 We have been down scraping the sprayfoam again today for a couple of hours and bringing some more stuff to the boat. Lisa claims that she cannot scrape the roof battons due to height restrictions. At 5 foot nothing her arms won't reach. Bit like mine when reaching into my pockets for my change. We found the ropes left over from the original Pickles in the attic and several windlasses but that was all. No mooring spikes. Hardly expensive items. Another couple of hours should see the sprayfoam removed. We are just half heartedly playing at it at the moment as we are waiting to get it moved as soon as possible. 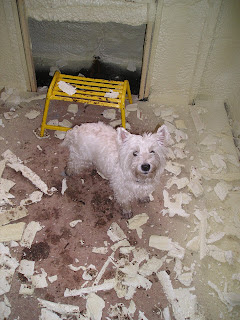 You're not helping Sam. 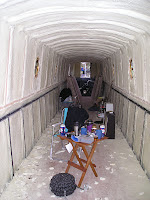 
I have just read on Waterscape that there has been a car crash on bridge 69 at the entrance to Kings Norton tunnel and the police no less, have closed the road and canal until an inspection has been carried out. Give me strength. Am I ever to get this boat to the Ashby. Unless the inspection happens before the 25th I'll be stuck at Hanbury for another week. Another delay and our plans for moving out of the house at the end of February could be scuppered although I do think Lisa would be quite happy to move on today and make the best of it.