This blog is becoming a periodical with the 'period' getting longer between the 'icals'.

I found a bracket in the Rayburn the other day red hot and in the centre of the other burning coal. It wasn't necessarily an important bracket but a bracket nonetheless. I have built everything on the boat and I don't recognise it as a bracket that I've dealt with in the past but it may be important I really don't know. It may also have come bagged in with the coal as it was bagged at the coal merchant and it is actually him who is missing a bracket. It's all a little worrying.

It was half  term the other week and we went for a jolly down to Braunston and back. Pretty uneventful trip with few highs or lows but a trip nonetheless. We didn't even have a pub meal and spoke to no-one else apart from friends we had over at Suttons Stop. There wasn't even many others on the move and I didn't take any pictures.

There was one exception when I was on the towpath attempting to recover my hammer that had slipped from wet hands and been lost in the canal the night before (I recovered four mooring pins before I got the hammer back), I was approached by a man and two youths. The man asked me if Miss D was aboard. A little surprised I called Lisa. It was apparently one of Lisa's pupils who had been in the area and had seen us in the co-op the evening before and, knowing Miss D lived on a boat, got dad to bring her to the moorings to see if she could be spotted. Indeed she was. And a little surprised she was too. Especially as she was wearing her leopard skin pj's. I'm not allowed to put up photos, unfortunately.

We're now all wifi-ed up with a new router providing a wifi bubble around Pickles no2. The dongle works well and the new router converts the 3g signal to a wifi signal available anywhere on or off the boat without having to plug anything in (if you have the password or can get through my security screen. Come and try if you're hard enough). It has made it all a little more convenient as Lisa and I can get on-line at the same time, albeit slowly (it's only 3g after all). It works with the the kindle and is supposed to work with the printer but doesn't at present. We don't have very much that is wifi enabled but what exactly do you need? I just need to wire it up to the 12v system now. 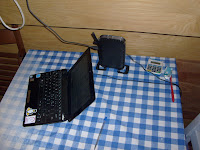 New router
On the technical side of things (ignore the next bit if you're not of a technical bent) the router is a Netgear MBR624GU that is very simple to set up. It's configured through your web browser so works on Windows, Mac and Linux. Highly recommended for one and all.

We needed a new (second hand, very second hand) car and bought one the other day, then promptly give it to Terri. Brilliant. We bought our daughter a car several years ago but she off-loaded it onto to us as it's too expensive for her and we drove around in said car for a year. Now she gets the new one, insured, taxed, MOTed with a full tank of petrol. Where did it all go wrong. She's graduating this year from acting school and better get an acting job pretty damn fast. This being nice malarkey is't going to last forever. And it better be a well paid job. I may have to get out the old contacts book. What was that number for Torrentino?

I'm honoured to be left on nb No Problem's blog list after Sue purged over a hundred from the list. One of the 32 left. I may do the same as I also have about a hundred and fifty on my blog list and I tend to scan all of them but it is all a little too much.

I see Sue has knocked me off, I expect that is because I only post while we are onboard.
We passed your boat last time we were on the Ashby, it would be easier to spot with a name on her.

The whole point is not being easy to spot and at eight pounds a letter for the sign writing, it's going to be up to me to do it. I'm threatening to paint it this year.

Thought you'd dropped of the edge of the world, that is down Braunston way isn't it? You have to be careful with brackets, tricky devils.

yes. just the other side of the tunnel.

Tricky devils indeed but from where?

Oh Brian I didn't realise I had knocked you off!.. I shall put you back as soon as I have posted this comment.

The boaters blog page was getting so very long, I thought it better to shorten it some, like Pete says there are hundreds of bloggers out there, I suppose I have chosen some of the earlier regular blogs to keep..

PS I just looked Brian, no I didn't knock you off!