It is about this time of year that we decide which marina we are to put ourselves into for the three months of summer when I have to go off and run our small campsite in France. Since I am away and Lisa is in charge, she has the choice as to which marina to go in to. This year it is to be Pillings Lock on the Soar. It has the right feel for Lisa and will be a complete change from Alvacote where she was last year. It was more money than Alvacote but they didn't demand the six hundred pound deposit that Hinckley Marina demanded the year before with only two hundred up front. It also has a holiday feel to it which may not be such a good thing for Lisa.
So we are on our way there starting last week where we managed to get to Hartshill with the four day view to be at either Trent Lock or Shardlow by this weekend before moving up the Soar. It leaves a little leeway for potential flooding on the rivers but at this stage that looks unlikely. I reckoned that six hour days would see us there without a problem although I was to be wrong (I have a record of vastly under-estimating time taken for trips) and they ended up being nine hour days with one eleven hour day thrown in for good measure. At Shardlow, we decided to have a Saturday night BBQ and managed to set fire to someone's hedge and they came out to the towpath to complain. Oops. 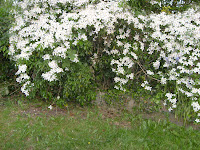 I don't see any damage
On the way a cyclist flagged me down to ask if I had a pump to fit their bike. Always the good Samaritan (not), I did and they were soon on their way again. Then, at bridge 15 on the Ashby, a hire boat decided that he would share a bridge 'ole with me. Not a bad idea as it is easily wide enough, but they started to panic as the entered the 'ole and tried to put it into reverse and we inevitably collided. Oh well, these things happen. No damage done. The rest of the journey was quite event free but it was all a tad hot at the tiller and Lisa had little sympathy with me (surprisingly). 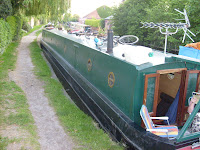 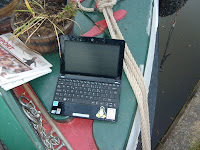 My new netbook (note the Linux stickers)
We have exceeded our monthly allowance with T-Mobile as I have been downloading all my  and open source linux stuff to fill my new netbook with. My ten year old laptop is still going strong but has been retired for less demanding work as it was all getting a little too much for it. Bless. I may use it for experimental software on older machines, something Linux is perfect for. I still need my MS Windows partition as Lisa now wants to use it to save her bringing her work laptop home. I can hardly complain, can I?

I've read this. And then I've read it again. Um, there's no easy way to say this, so I'll just come straight out with it: what have you done with Pete?

Looks more like Pingu to me. And have you been setting fire to your netbook as well? The screen surround looks a little molten.

Indeed, Halfie, I know from painful experience that incorrect settings in Linux can result in molten computer, boats, rivers and planets. Global warming is also a direct result of Linux use.

Oh dear. Everyone's a comedian. A couple of sceptics. This is hardly the place for M$/Linux wars but it does what I want it to do.

The computer is shiny (as in new) not molten and there's no such thing as global warming.