We were in London at the weekend as Terri had bought us a couple of tickets to see Dirty Dancing. Personally I thought there was a tad too much dancing involved but the clue was in the title. I also missed out as I had never seen the film unlike lisa who could hardly contain herself at times but she didn't fall asleep which is a good sign unlike several other productions that she has been to. It was actually very good. Possibly not my cup of tea.

We are finally out of the water and having our bottom blacked (oh, arr missus), at least I am doing it myself. I got it spray washed, wire brushed and the first coat on on the first day and it was quite hard work. I also had to tighten several bolts on the rudder as all of them were loose. The tiller has not been connected to the rudder properly from day one and there has always been a lot of play in it. I just thought it was normal (idiot). Well it's sorted now and hopefully we can now go in straight lines (maybe). 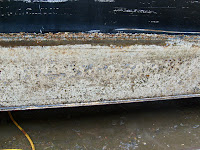 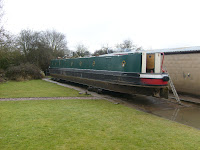 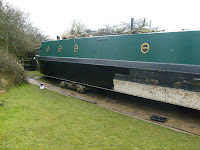 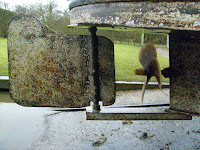 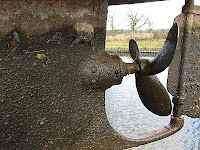 Look at the lines on this stern gear and compare it to that of nbChertsey. Which one was but as a utilitarian working boat and which a leisure boat. nbChertsey's is almost art deco in appearance and very elegant compared to Pickles no 2. And it looks a lot less worn. They don't built them like they used to.

The pressure was off after I got the first coat on and it didn't really matter that there was a couple of days of rain. There was very little (nothing actually) of the original blacking remaining and I fear that if I had of left it for another year it would have really suffered. I think that Pickles was just shown the initial blacking before leaving the factory. Last years moving through ice probably didn't help either. There were a couple of pits in the hull but nothing to be worried about. 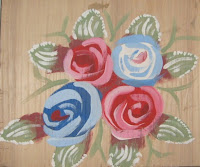 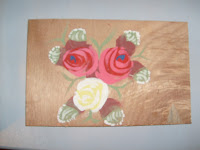 I have been trying my hand at roses and castles (well roses actually). A more dismal attempt at the art would be hard to find I'm sure you'll agree. Nevertheless, since I insist on low standards in just about everything I do and usually fai to achieve them, this is more than adequate. Lisa bought me a DVD for Christmas and this is the first time I've tried it out. Well with some sample pots from B&Q and old model paintbrushes that I found in my workshop, what did I expect. Still things can only get better, can't they. Watch out Phil Speight, I'm a'comin'.

Are you sure that you don't live with me? It all sounds very familiar.