I've bought myself a new toy for £89.99. A chainsaw no less. It is essential livaboard equipment that we have done without for the last two years but I have no idea how. Yesterday I was cutting my first logs with a chainsaw for twenty years of to feed our perpetually hungry Rayburn. It's not very big but is a little scary as any wrong move and I'll have my leg off. Only then would I buy some protective clothing. It'll be a little cheaper if I only have one leg. 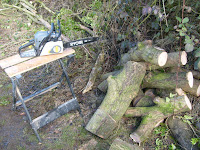 Every time I put my hand in my pocket (and that's not very often), I end up pulling out a small clear plastic bag. Unfortunately, only dog owners will understand the significance of this.

We were down in London (why are we always 'down' in London) on Saturday evening to watch a play that Terri was in as part of the second year of her degree. She was obviously the star but we may be a little unobjective as far as that is concerned. It was very good though. Nothing like a bit of Saturday night socialism with Brecht.  Chekov next apparently. That'll be a hoot a minute. Think I'll make my excuses for that one.

I gather that we are now classified as travellers as far as local authorities are concerned. This is all wonderfull stuff (although I imagine that some liveaboards may have different views on this) but some boaters have expressed a wish for new 14 day moorings and other privilages and this I see as problematic. The whole system is one big 14 day mooring as far as I'm concerned with some 7day, 48, and 24 hour exceptions, so personally I don't want more moorings, especially ones specifically for me and my ilk.

The whole thing could backfire on continuious cruisers as BW may well come up with the notion that we are more trouble than we're worth and push to have all boaters to have moorings with no such thing as constant cruisers. I don't need any special priviliages and am very happy to continue CCing and mooring in out of the way places not bothering anyone, neither the local authorities not BW. It seems that this has all stemmed from some CCers at the western end of the Kennet and Avon who seem to want to stay put and not fulfll their obligations. If only I fulfulled mine as well. Kettle, black?

I'm clumsy enough with a bow saw and axe, so a chainsaw would be the death of me...

Seriously, I have scars!