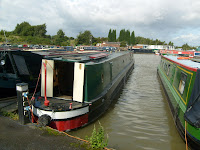 A rare picture of an imprisoned Pickles. Soon to be released (please note the firewood on the roof again. How could I have any credibility as a continuous cruiser without the wood on the roof).

We are now back on Poverty Rock after three months in sunnier climes (at least for me. Lisa was in France for six weeks). We've gone from being respectable, law abiding, land owning, businesspeople to being scum, don't pay a penny for the waterways, uninsured, unlicensed, liveaboard boaters. It's amazing what a short boat journey ac cross the Channel can do for a persons reputation. Back in the land of the perpetually poor, we are bringing freedom to poor old Pickles who has been sadly neglected for the past couple of months in Alvacote Marina. She's still not finished and won't be this year either but we may get a little more completed this year.

I did promise that I would update the blog when away but other things took priority and I didn't get round to it in the end. C'est la vie. I've got to get my rating back and get myself up to number thirty on the boaters roll where I quite rightly belong. Why are there eighty six people on my audience figures? Why am I number forty six on the ratings? I haven't updated this for months.

So what's been happening. Who's dead, who's sunk their boat, who's got themselves hung up in a lock and who's new to this boating malarkey? I would normally read about twenty five or thirty narrowboat blog entries per day but our interweb connection in France was awful so I lost track soon after arriving and never caught up again. The last time I looked there were over 1000 entries on my Google Reader thingy and I shan't be getting to read all those.

Just to remind those of you who read this drivel, this is not a cruising log. I don't know how many hours I do each day (if any) or how many locks or bridges I've gone through or how many gallons of fuel I put in or how much it costs or how many engine hours to the next oil change. I really don't care. This is the minutia of life that is uninteresting to me. This blog is all about my ego. my opinion, my politics, my interests, my boat and my partner (the long suffering Lisa). So don't expect a list of all the above 'cause you won't get one. I write this amuse myself, not you.

Nice to see you back again.

good to have you back -i also enjoy your blog sorry to be intrusive!

I don't need to be patronized you know.

Well, you're number 38 now, and you've overtaken me. And I'm the one who has been trying to post once a day, not swanning off to France for months on end. My blog must be even more boring than yours. (!)

Thank God! Something good to read at last!

Who are all you people?

This is Granny Buttons blog, right?