These blog entries are becoming a little sporadic to say the least. Once a ever ten days just isn’t good enough but I have an excuse, however pathetic. Despite my previous rant about quasi-sine wave verses sine-wave the internal mouse on the laptop is the only thing that I have found that doesn’t work with the quasi version. The internal mouse software seems to conflict with the electricity form and the pointer tends to do it’s own thing. It works perfectly with mains but not through the inverter. We must try a usb mouse as that may solve the problem. 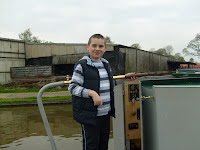 Last weekend our friends Steve and Jill and their offspring Cloe 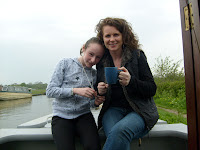 and Macauley arrived to take over the boat for the day. We took them on a short trip and ended up in a wooded mooring for lunch, unusually cooked by Lisa, before depositing them at their car at the end of the day. A good time was had by all. Well that’s what they said. Heaven knows what people really think.
This week I have been painting the boat on the outside, putting up the headlining and fitting the internal illumination thus hiding the exposed wiring. It all looks very impressive and I’m hoping to get both finished by next weekend. 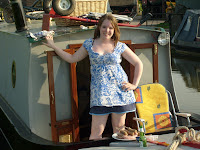 Terri is has been visiting for the last couple of days after finishing uni for a week with her fancy London ways. Do they ever do any work at uni these days. In my day it was constant essays and exams, we never had any time off and when we did we had to work all the hours just to keep up. Used to live in a cardboard box in’t middle of road...etc etc
The Ashby is very busy at present and I suppose it will be the same until the end of the summer season. It was much nicer when it was ‘our’ (constant cruisers 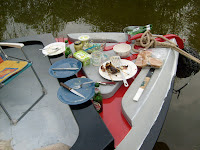 and bridge hoppers) canal as we now have to keep permanent smiles on and wave cheerfully at all and sundry otherwise we will get the reputation of being grumpy old goats. On this boat I already have that reputation so it shouldn’t really bother me.
Lisa thinks she’s on holiday with the advent of the good weather and as such finds it difficult to get out of bed to go to work during the week. She also finds it difficult to stop drinking beer at the weekends. I, on the other hand, have never fo 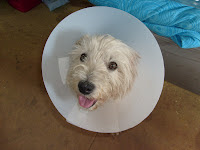 und either difficult and Lisa says that my whole life is a holiday. I’ve never heard the like.
The dog has cut the top of her ear off. She was limping around, couln't make the jump and fell into the alternator belt. Blood everywhere, a visit to the vet beckened and much money changed hands. Bloody dog.